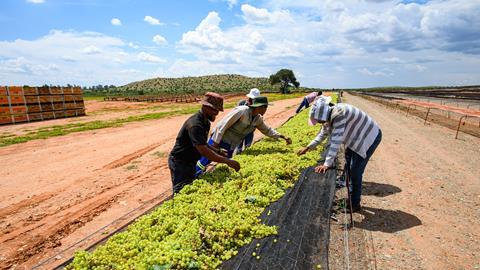 Key figures from the South African raisin industry have visited major suppliers in Britain to develop trading relationships and explain the benefits of the country’s product.

The trip in May saw industry body Raisins South Africa visit four of the leading UK dried fruit suppliers, highlighting the quality and low residue credentials of the country’s raisins and exploring opportunities to grow the market further.

“The experience was incredibly valuable,” said Ferdie Botha, chief executive of Raisins South Africa. “It’s been a while since we’ve caught up with UK suppliers because of the pandemic, so meeting face to face was an excellent opportunity to gain an understanding of the current UK dried fruit market and establish areas where we can offer support.”

He added that South African raisins have a reputation among suppliers for “clean and excellent quality”, with the country focusing on low residue levels.

The hot, dry climate of the Orange and Olifants River regions means pests and diseases are a minor risk, according to the industry body, and thanks to good biological practices and control, few chemicals are needed.

South Africa is also a source of prized golden raisins, which are difficult to obtain from other sources.

The UK visit comes amid a challenging production season in which crop losses of 20 per cent were experienced due to flooding and above-average rainfall. Despite that, the total marketable volume for the season is estimated at 67,000 tonnes, which is slightly above last year’s figure.

In addition, trade buyers and press from the UK and Germany will be taken to the Northern Cape in November to showcase the work of the South African raisin industry and continue to build long-term relationships.

“Dried fruit has received a lot of negative media,” he explained. “We’ve come a long way over the past two to three years to work on changing this perception and communicate the benefits of our product category. Behind the scenes we are working with various origins to showcase the benefits associated with the consumption of dried fruit.”