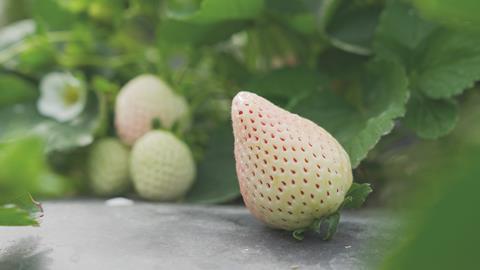 A new white variety of strawberry bred at the University of Florida has caused a stir in the UK press following the berry’s launch at Marks & Spencer.

Florida Pearl strawberries – which have a distinctive white flesh, dark red seeds, and white to light-pink skin – are a first for UK retailers, and shoppers’ wide-ranging reactions to the new variety have been reported by The Daily Mail.

Social media users expressed a mix of surprise, excitement, horror and satisfaction with the new variety, which M&S is marketing as White Pearl on its packaging. Some called the berries “absolutely delicious” while others branded them “anaemic”.

The variety, which is owned by the Ekland Marketing Company of California (Emco Cal), is a white strawberry also known as a pineberry since there is a hint of pineapple aroma when you bite into it.

The breeding process began in 2012 when strawberry seeds from Japan were sown at the University of Florida. The plants’ pollen was crossed with a Florida variety, and the fruit’s seedlings ranged from white to pink to red.

Bred by Dr Vance Whitaker of the University of Florida, the variety boasts high yields, averaging over 1kg per plant, and the firm berries have an excellent shelf life. Harvesting of the conically shaped berries can take place only 50-60 days after planting, between November and June.

According to Emco Cal, when fully ripened, Florida Pearl’s flavour and appearance offer chefs and bartenders inspiration for new dishes and drinks.

M&S strawberry buyer Tom Pedley told The Daily Mail: “At M&S we love to be first to market and introduce products that no one else can, our customers get really excited when we introduce new flavour produce or hybrids.

“We’re known for our Candyfloss Grapes, while the Limelon was all over the news so that’s why we had to bring the White Pearl Strawberry to M&S.”

M&S has advised shoppers to eat the strawberries at room temperature for “maximum deliciousness”. The retail price is understood to be £3.50 per box.