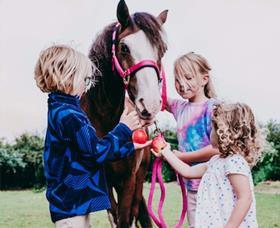 The team at Pink Ladywere so impressed with the girls’ letter and their pictures of Mac enjoying his new life surrounded by their apples that they got in touch with the cousins to arrange a special delivery of apples for Mac and a donation in his name to local horse and pony sanctuary Redwings Ada Cole. 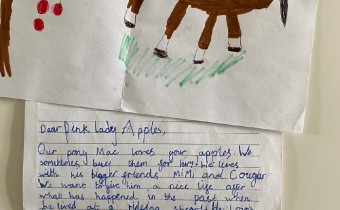 Pink Ladyhas donated to Redwings Ada Cole which is based near Harlow in Essex, not far from Mac’s new home with his young owners. Home to over 80 rescued horses, ponies, donkeys and mules, the centre is part of the national animal welfare charity, Redwings Horse Sanctuary, which has grown to be the largest horse sanctuary in the UK, working to save neglected and abused equines whose futures would otherwise be bleak. Currently, Redwings is responsible for over 2,000 rescued horses and donkeys across the country, including 700 living out on permanent loan in guardian homes.

Debbie Scott, head of fundraising at Redwings explains what the donation means to the charity: “We’re incredibly grateful to Pink Ladyapples for their generous donation. It’s fantastic to hear of the wonderful life Mac enjoys with his young owners, but sadly we have so many horses and donkeys in our care that haven’t had such loving starts to their lives and this donation is a wonderful way of supporting them.

“We can use the contribution from Pink Ladyto fund 100 nutritious feeds for our horses or buy enough hay to feed over thirty of our rescued residents for a whole month. As a charity 100 per cent funded by donations, this will make a real difference.”