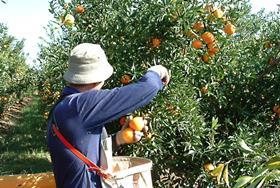 British backpackers visiting Australia will no longer be required to complete the required 88 days of farm work as part of their working-holiday visa, after a deal was brokered alongside the UK’s free trade agreement (FTA) with Australia.

Nationals leader and acting Prime Minister, Michael McCormack, was instrumental in brokering the deal and has promised Australia’s farmers the coalition government would deliver a new agriculture visa before the end of the year to assist with any subsequent labour shortages.

It's believed British backpackers account for up to 10,000 workers during the peak harvest period, with the Australian horticulture industry already struggling to find workers due to international travel bans.

This new farm work visa will be offered to residents from countries in the Association of South-East Asian Nations (Asean), which includes Indonesia, Myanmar, Vietnam, Singapore, the Philippines, Malaysia, Thailand, Laos, Brunei and Cambodia.

As part of the FTA announcement, Australian and British prime ministers Scott Morrison and Boris Johnson said a new two-way visa would be established between the UK and Australia for farm workers.

Can it be delivered?

The nation's peak farm lobby, the National Farmers Federation (NFF), insists it will only believe McCormack’s promise when it sees it.

'The details still have to be worked out,” stressed NFF president Fiona Simson. “I believe it still has to be finalised in Cabinet and by the expenditure review committee. We have to do this, this is a critical thing for agriculture,” Simson told the ABC.

Simson added that plans to bring in workers from Asean countries was significant, and any extra workers for Australian farms would be welcomed.

'Hopefully that will more than make up for the 10,000 British backpackers that we will ultimately lose. We were very surprised to lose the 88 days,” said Simson.

'We have a strong commitment from the Prime Minister, we made it clear when I negotiated this … this is a line we couldn't cross if we were to try and trade away seasonal workers at a time of shortage, it just didn't make sense.

'The Prime Minister himself has made a promise to the [National Farmers Federation] in 2019, that said we would work to an ag visa, so we are living up to our commitment,” Littleproud told the ABC.

“The majority of the 65,000 harvest roles in fresh produce are filled by visa holders, a growing number of these are returning workers from the Pacific and Australians, but overwhelmingly these roles are filled by backpackers. Industry’s reliance on backpackers, and the risk this presents has been highlighted during the pandemic,” said Rogers.

The AFPA has previously called for a dedicated harvest work visa with the objective of recognising the role temporary migrants play in the horticulture industry and reducing reliance on the Working Holiday Maker (WHM) or backpacker scheme.

Rogers said the seasonal agriculture worker visa secured by the Nationals will complement existing temporary visa pathways. “It is important to understand that the WHM programme is fundamentally a cultural exchange programme, designed to enable tourists to travel and work in Australia. While this has been invaluable to the industry to date in filling a critical labour gap, the introduction of the seasonal agriculture worker visa would enable the WHM programme to return to its core purpose,” highlighted Rogers.

Details yet to be finalised

Uncertainty remains for Australian farmers as to how the visa will be structured. Littleproud said participating Asean nations would need to opt-in to the visa programme, and it was unclear how many workers the programme could realistically attract.

'It will be for three years, and [workers] will have six to nine months’ worth of work,' he said.

'[They] must go back [to their home country] for three months of the year, each year over the three years. This is a great step, it's formalised an ag visa, once we put in a baseline of these 10 Asean nations, we can then look to add other countries into the future.'

Littleproud clarified the visa would have different conditions to the pacific labour and SWP schemes.

However, Rogers said visa conditions similar to those in the SWP would be ideal. “These conditions would ensure there are adequate protections for visa holders and requirements for sponsoring employers,” noted Rogers.

“Importantly the introduction of a dedicated visa will encourage better terms and conditions for harvest workers. If the new visa is similar to the SWP visa, this will also enable visa holders to return year on year; this is a great outcome for industry in terms of securing an ongoing and returning workforce.”

The peak industry body for vegetables, Ausveg, has also welcomed the announcement, saying it would; “provide a wider pool of workers available to Australian agriculture from the UK and the 10 Asean countries and will help to meet ongoing seasonal workforce gaps that continue through the pandemic.”

Ausveg national manager – public affairs, Tyson Cattle, added; “The horticulture industry has been calling for a dedicated and productive workforce for many years and this morning’s announcement is great news for the sector.

“The Asean countries are some of our closest trading partners, so extending the agriculture visa to these countries makes economic sense and demonstrates our commitment in helping our regional neighbours.”

The Australian Workers' Union (AWU) has highlighted its concerns with the new visa proposal, paying particular reference to what it said is “routine exploitation and abuse on Australian farms”.

'Johnson rightly told Morrison he needed to scrap the 88-day requirement for Brits to work on Australian farms, because they were being routinely exploited and abused. They're not alone — citizens from Sweden, Denmark, Norway, Germany, and many others have raised similar concerns. But now David Littleproud is telling Southeast Asians to come on down for the same treatment. It's shameless, stupid, and immoral.

'Mr Littleproud claims Australians 'can't be incentivised to have a crack at these jobs.' Absolute garbage. Every day Australians wake up and do much tougher and more unpleasant jobs than fruit picking,” continued Walton.

'They can be incentivised to do those jobs with decent pay and conditions that protect them from abuse. If the government goes ahead with this abhorrent proposal exploitation and abuse on Australian farms will explode. And it's already so bad it warrants a Royal Commission.

Walton said much of the labour shortfall on farms could be made up quickly by providing Australian-standard wages and protections.

“Where there are still gaps, programmes like the Pacific Labour Scheme and the Seasonal Worker Programme are much better than simply opening the gates to vulnerable Southeast Asian workers without adequate rights and protections,” he outlined.