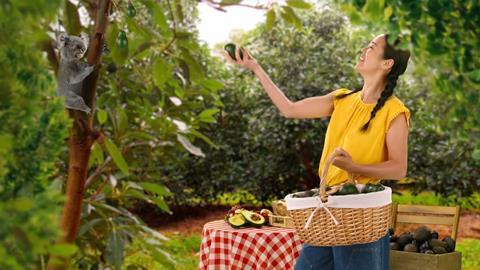 The three-month, A$300,000 (US$187,000) campaign was funded by Australian growers through Hort Innovation’s international trade programmes and ran on social media and television across the region. The campaign engaged international audiences using iconic Australian imagery including koalas, the outback, and beaches.

“We wanted to engage the international target audience by featuring classic Australian animals and landscapes,” Montgomery said. “The idea was to create a fun, live-action postcard. The campaign’s performance was exceptional, with key performance indicators sitting at 45 per cent above the benchmark.”

John Tyas the chief executive of Avocados Australia said the campaign is an example of the industry working together to promote Australian avocados to access international markets.

“Australian growers can no longer rely on the domestic market alone and we know there are good opportunities to grow existing and new markets, particularly in Asia,” said Tyas.

“Across the world there is incredible demand for the premium quality of Australian avocados and it’s great to see campaigns supporting our world-class produce.”

The video format of the social media campaign had the highest engagement results in Singapore and Malaysia, the campaign was exclusively aired on the Lifetime TV Cable channel in the South-East-Asia region, reaching more than 11.5m consumers.

The initiative is part of Hort Innovation’s trade programme, a A$120m (US$75m) investment that includes research and development, as well as marketing projects that promote the Australian horticulture industry.

The avocado industry also plans to showcase its produce at the upcoming Asia Fruit Logistica in Bangkok next month taking the opportunity to develop new business, make new top-level contacts and gather essential market information on every aspect of the fresh produce trade throughout Asia.