By the end of February more than 468,000 stickers have been entered from the eight countries participating 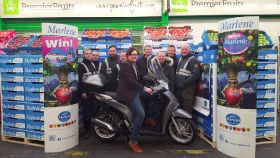 Participants from all over Europe entered a total of 468,573 stickers, using the many channels offered by the competition, including the official website and WhatsApp.

The prizes on offer include Honda SH125i scooters complete with ABS and, as the prize for the final draw, an Audi A3 Sportback e-tron, a plug-in hybrid.

“We are delighted with the enthusiasm with which consumers have taken part in Win! Marlene,” commented Vog director Gerhard Dichgans. “The countries where the most people are entering are Italy and Spain, two markets where our brand has been established for a considerable number of years. However, the numbers are also encouraging in the other countries, where Marlene was launched more recently."

Entrants have until the 30 June to visit their local supermarkets or greengrocers and buy Marlene apples with the special competition sticker, featuring the nine-character code needed to enter on the back.