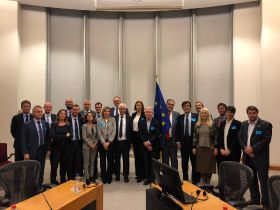 Members of WUWM at the European Parliament on 6 November

European members of the World Union of Wholesale Markets (WUWM), led by Italian wholesale markets association Italmercati, have presented a new declaration at the European Parliament that underlines their aim to strengthen collaboration between European markets and to increase their visibility at a European and international level.

The declaration, which was originally signed on 9 July in Paris by all of the union’s 122 member markets in 22 EU countries, highlights the importance of the wholesale market model to key EU policies like food security, the circular economy, supply, distribution and fresh produce traceability.

It also highlights what WUWM describes as the fundamental function of wholesale markets in defending the value of agricultural production and safeguarding the European agricultural model based on the diversity of its products.

“Markets are key players in the agri-food chain,” the organisation said in a statement following the document’s presentation. “They serve European policies, farmers and citizens/consumers, but are often forgotten by European and international institutions compared to other food chain players – farmers, retailers, supermarkets.”

Wholesale markets remain one of the most important links in the EU food supply chain, WUWM argues, accounting for 25m tonnes of fresh produce sold each year, or roughly 40 per cent of total fruit and vegetable supply, and reaching 200m European consumers.

“As a result, they ask to be heard in the debates and strategic orientations of the sector. Invisible to the general public, but playing a vital role, their model facilitates the supply chain of end-to-end fresh produce while at the same time providing market access to thousands of small businesses and local producers,” it added.

The European wholesale market model faces some major challenges, however. One of these will be to enhance the attractiveness and competitiveness of European production and countering a trend in certain areas of the retail business towards reducing the diversity of supply and in many instances reducing seasonality.

According to WUWM, European governments and international bodies have a role to play in improving consumer knowledge and understanding of the diversity of fresh and high quality produce.

The declaration document also sees the market commit to increasing their own cooperation and sector regulation in order to become more competitive, innovative and logistically adept.

"The Joint Declaration of European Wholesale Markets we [presented] to the European Parliament is a solid foundation on which we can engage in constructive discussions,” said Stéphane LAYANI, president of Rungis Paris International Market in Paris and vice-president of WUWM. “This act is truly fundamental, for two reasons: it allows us first to glimpse the sustainability of the activity, and then marks the starting point for enhanced cooperation with European and international bodies."

Ioannis Triantafyllis, CEO of Athens Wholesale Market and chair of WUWM in Europe, also welcomed the move. “This is a great day for the markets. The participants representing the main European wholesale markets in almost all European countries presented to the European Parliament their declaration and their positions providing our ambitions and our will to highlight the fundamental function of wholesale markets in the food supply chain.”