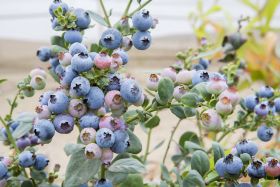 The company has invested US$3.5m in a 70ha production site in the Valle de Santiago in the state of Guanajuato. “We are replicating the same model as we have in Peru, undertaking advanced genetic breeding, investing in our own production and exporting,” said the company’s founder Carlos Gereda, who is overseeing its rapidly expanding global operations.

The breeder has developed a trio of new blueberry varieties, Salvador, Matías and Abril, through its breeding programme with the University of Georgia which it plans to roll out globally, using a producer club model. The next phase of its expansion will see it set up a similar model in Spain in 2021.

Commenting on the Mexican facility, Gereda said: “The Mexican season, which runs from December to the end of March or beginning of April, will complement our production in Peru, where the harvest begins in mid-July and runs through to the end of the year”.

“Our ambition is for our varieties to eventually account for 10 per cent of local production in each of the countries in which we’re present,” Gereda said.

All three of Inka’s new blueberry varieties have been adapted to suit growing conditions in Peru and are characterised by their high yield, firmness and large berry size. Salvador has been on the market since 2017, while Matías and Abril are due to be launched shortly.