After the disappointments of the previous campaign, Namibian table grape producers are upbeat about the new season 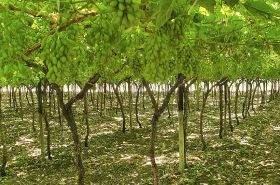 “While the major production is still concentrated around Aussenkehr, there are interesting new developments in the desert-like region towards Ais-Ais, the well-known tourist spot in Southern Namibia," he explained. "These grapes will probably be harvested and packed around 26 October, and will definitely be the very first grapes in Southern Africa for some time to come.”

“Timson, an SFNL variety, is a very producer friendly variety which simply means that it needs little work in the vineyard to produce an excellent crop," Vermaak confirmed.

Expectations for the early market are very positive and could be of benefit to the Namibian industry because it is so early on the market. “Here in Aussenkehr the start of the season should be around Week 45 and week 46," he added.