Scientists in America successfully mapped the genome of 725 tomato varieties, locating a rare "flavour gene" in the process 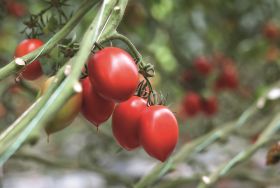 Scientists have identified a rare tomato gene that could pave the way for breeding tastier tomato varieties.

Researchers at the Boyce Thompson Institute managed to create a “pan-genome” of tomatoes by mapping the genetic information on 725 cultivated and related wild varieties, providing insight into the properties of different genes.

Their findings, published in the journal Nature Genetics, mean breeders could in the future better select genes for their flavours and differing qualities.

“The current study is the first to mine all of these genome sequences—as well as another 166 new sequences generated by the researchers—to hunt for genes that were absent from the reference genome.

"During the domestication and improvement of the tomato, people mostly focused on traits that would increase production, like fruit size and shelf-life, so some genes involved in other important fruit quality traits and stress tolerance were lost during this process."

One such gene discovered was the rare gene named “TomLoxC”, which produces a more flavoursome tomato. The gene is prevalent in wild tomatoes, but only present in 2.2 per cent of older domesticated tomatoes.

"TomLoxC appears, based on its sequence, to be involved in producing compounds from fats," said BTI faculty member James Giovannoni.

"We found it also produces flavour compounds from carotenoids, which are the pigments that make a tomato red. So it had an additional function beyond what we expected, and an outcome that is interesting to people who enjoy eating flavourful tomatoes."

Clifford Weil, program director at National Science Foundation’s Plant Genome Research Program, added: "How many times do you hear someone say that tomatoes from the store just don't quite measure up to heirloom varieties? This study gets to why that might be the case and shows that better tasting tomatoes appear to be on their way back."