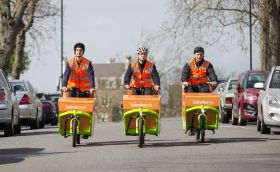 Sainsbury’s has committed to achieving net zero carbon emissions by 2040, investing £1 billion over the next twenty years into upping its environmental efforts.

Chief executive Mike Coupe, who recently announced he will step down from his role in May, said the government’s target of net zero CO2 emissions by 2050 “isn’t soon enough”.

The supermarket stated the £1bn investment will go towards a programme of changes, with a focus on removing carbon emissions, food waste, plastic packaging, water usage and increasing recycling, biodiversity and healthy, sustainable eating.

Sainsbury’s will work with the Carbon Trust to assess its emissions and set targets for reduction, with reports on its progress to be released every six months.

“Our commitment has always been to help customers live well for less, but we must recognise that living well now also means living sustainably,” Coupe said.

“We have a duty to the communities we serve to continue to reduce the impact our business has on the environment and we are committing to reduce our own carbon emissions and become Net Zero by 2040, ten years ahead of the government’s own targets, because 2050 isn’t soon enough.

“We have a strong heritage of reducing our carbon emissions – we have reduced them by 35 per cent over the past fifteen years despite the footprint of our business increasing by over 40 per cent.

Much of Sainsbury’s plan is straightforward: increasing the scale of its current environmental efforts. That means more food redistribution, less food waste, more recycling and less plastic use.

Part of Sainsbury’s plan involves working with suppliers and asking them to reduce their own carbon emissions.

The retailer also committed to increase its use of renewable energy, and reducing overall energy usage. Fridges will be made more efficient with natural refrigerants, and its transport fleet will use alternative or low carbon fuels.

Coupe added: “We invested £260 million in over 3,000 initiatives over the last decade, including the start of our LED lighting programme and refrigeration. Over the next 20 years we will invest a further £1 billion in programmes that will transform the way we do business and put environmental impact at the forefront of every decision we make.”

By 2022 all Sainsbury’s stores will be fully lit by LED lighting. It also announced it will review its water usage, with examples such as recycling water from ice on fish seen as a way to cut back.

"Today's announcement is an outstanding example that being green shouldn’t be a barrier to success. I hope to see other major supermarkets following their lead ahead of the COP26 UN climate conference later this year in Glasgow."