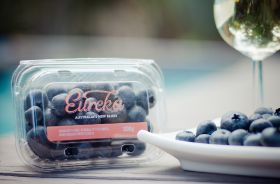 Pioneering blueberry breeder and producer Mountain Blue (MB) is gearing up to develop exports of its Eureka-brand blueberry varieties from Australia with the launch of a new joint venture company.

“We’ve worked with a number of exporters in the past but we decided it was time to take more control over our export destiny,”  Andrew Bell, managing director of MB, told Asiafruit. “BerryCo was one of our export partners and we have set up a company with them to market fruit from Australia.”

BerryCo Australia will export production from MB’s own plantations, which comprise around 140ha near Lismore in New South Wales as well as projects in other locations around the country. The company will also handle fruit from MB’s network of Eureka growers across New South Wales, Queensland, Western Australia and Victoria.

“MB’s main production season in New South Wales starts around June and goes through Christmas, but we’re working hard to get a 12-month supply of the Eureka varieties with our network of growers,” Bell explained.

Export sales will be managed by Valleyfresh’s New Zealand-based export team – Anton Masutti, George Guo and Raymond Dong. They will work in conjunction with MB’s marketing department run by Josh McGuiness. “Josh and the marketing team will manage branding and promotion, planning and forecasting volumes as well as coordinating the logistics from this end,” said Bell.

MB’s flagship Eureka brand of blueberry varieties will spearhead the export programmes. The suite of varieties are characterised by their crunchy texture, jumbo size and sweet flavour, and BerryCo is confident they will perform well in Asian markets. “We believe we’re bringing something to the Asian market with a real point of difference in Eureka, and we want to work closely with our customers over there to develop that brand,” he said.

With much higher production costs than its overseas competitors, Bell acknowledged that Australia must focus on supplying a premium product.

China and Japan, two markets that have displayed a readiness to pay a premium for high quality, both remain off-limits to the Australian industry, but Bell said BerryCo will focus on a range of other markets this year. Singapore, Hong Kong, Indonesia, Thailand and the UAE will be the main targets.

While the domestic market currently absorbs the overwhelming majority of Australian blueberries, Bell noted that pricing is coming under pressure as more production comes on stream. “The pricing pressure will only increase in the coming years, so we expect the export piece to become more important in the future.”

The full version of this article appears in the September edition of Asiafruit. Pre-order your copy now.