In addition to its own checks, China’s customs authorities are now requiring documentation to help prove imports are free of Covid-19 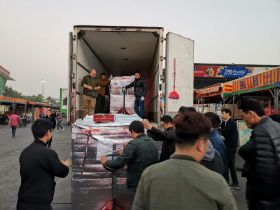 China is continuing to ramp up safety requirements on imported food in the wake of a Covid-19 outbreak at Beijing’s Xinfadi Market.

Following the detection of Covid-19 on 13 June, China’s customs authorities had increased the inspection and testing of imported foods including fruits.

To support this, the General Administration of Customs of China (GACC) is now requiring a letter of guarantee that imported foods comply with China's food laws and regulations from the World Health Organisation (WHO), to ensure the products are free from Covid-19.

According to a report from the ABC, this condition is being applied to all food imports, no matter the source.

Australia is in the midst of its citrus season and China is the country’s largest export market.

However, David Daniels, general manager of market development of Citrus Australia, told the ABC these new requirements shouldn’t have a significant effect on exporters who already employed best practice.

"It's coming from the regional offices in China who are overwhelmed with testing. It would be a monumental task having to do it. (If) Clearance can be expedited. I don't think there's any harm in it,” said Daniels.

"At the end of the day, they've got their sovereign right to protect their borders. It doesn't concern us in any way because we've got great food safety practices."