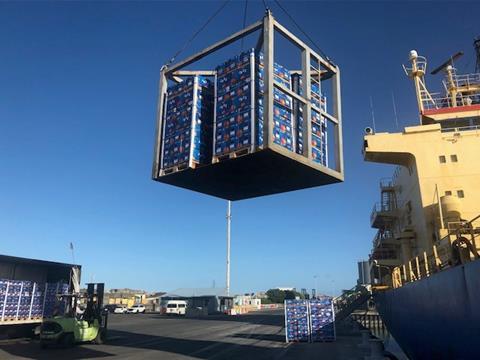 Fresh produce exporters all over the world are currently grappling with Covid-related shipping issues, including reefer container shortages, port congestion, and reduced or disrupted services from shipping lines.

But the challenges have been compounded for New Zealand apple shippers, who are vying with other primary industries such as meat and seafood for limited freight space and services in a market where global consolidation has reduced the number of shipping lines servicing the country.

“There is a difficult dynamic this year,” Gary Jones of industry body New Zealand Apples and Pears told Fruitnet. “There is less shipping flexibility, so exporters are influenced by container availability and shipping line availability.

“We are getting fruit exported in good volumes, but it’s more lumpy than normal. Exporters might have a preferred market for a variety of fruit, but they have to pack a variety for another market based on shipping line availability. Shipping is having an impact as much as market demand on what gets packed.”

Ben McLeod of leading grower-packer-shipper Mr Apple said the unpredictability of shipping availability and services was making it challenging to meet customer demand.

“One week you’ll get 100 per cent loaded and shipped but then the following week it might be 60 per cent, so it’s forever moving and changing. Some [shipping] lines are better than others so the impacts on some exporters are far worse than others,' he said.

“There is also competition for space with other industries. The overall impact for New Zealand apple exporters is not being able to deliver 100 per cent of what’s ordered and on time. This causes frustration for both suppliers and customers.”

While noting that the shipping issue is a global one for the fruit business, McLeod said New Zealand exporters appeared to be more exposed.

“More people are shopping online, which has led to a large increase in imported dry containers, resulting in insufficient numbers of reefer containers returning to New Zealand,” he noted.

“Port Charmers has major issues with equipment. Nelson has reached capacity on occasion and stopped receiving cargo. Tauranga is heavily congested as the main discharge port for Auckland when vessels omit Auckland. Napier went early with its restricted acceptance window to ensure capacity was managed,” he said.

Barkle added that the equipment shortage and scheduling issues were compounded by a vessel having recently been quarantined in Hong Kong for two weeks due to a positive Covid case on board.

These recent disruptions come against the backdrop of a growing capacity constraint issues for New Zealand apple exporters over recent years, said Barkle.

“Growing volumes of kiwifruit have steadily increased competition for space with apples over the last few years,” he said. “A diminishing number of lines servicing New Zealand due to global consolidation has reduced services and options.”

The first charter vessel, which is bound for the UK and Continental Europe, is set to leave Napier (after loading in both Nelson and Napier) tomorrow (1 June). The vessel is loaded with fruit from T&G as well as a number of other key New Zealand suppliers.

The second charter is due to depart Nelson on 8 June, bound for the US.

T&G Global was forced to charter ships last year due to container shortages and port closures caused by the Covid-19 pandemic. Edgecombe told Fruitnet the company did not expect to have to repeat the exercise in 2021, and he said T&G would also look at chartering a ship to Asia.

Mr Apple’s McLeod said charter ships presented an option to get product into the UK and Europe on time without delays. “Costs are slightly higher than reefer containers, but it helps to get fruit into the market on time as well as reduce pressure on cool store inventories.”

The shipping issues are the latest in a series of challenges to face New Zealand’s apple industry this season. Hailstorms during December caused widespread damage in key growing areas (Nelson and Otago), while harvesting was rendered more challenging by labour shortages. Nevertheless, the industry is managing the challenges well.

“We’ve had very good weather over harvest with little rain,” explained Jones. “Colour development has been exceptional, so growers were able to pick everyday with less picks. This gave us a lot more productivity per worker with the picker able to pick more each day.”

After earlier predictions of a near-record crop, New Zealand apple production is now forecast to drop 8 per cent year-on-year to 543,000 tonnes, according to a recent USDA report (Fresh Deciduous Fruit Semi-annual). The reduction reflects damage from hailstorms and generally smaller fruit due to a cooler summer.