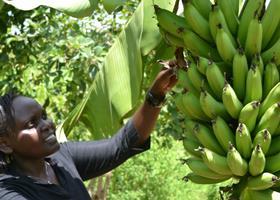 At a webinar with African and European decision-makers, Afruibana, the association of African banana producers, presented the African Banana White Paper.

The result of two years’ work, the White Paper provides an overview of the European market following a decade of liberalisation. During this period, ‘dollar’ bananas from Latin America have increased their share markedly, at the expense of African, Caribbean, Pacific and European bananas, Afruibana pointed out, while prices have declined significantly.

According to Afruibana, its set of solutions could transform the sector, giving it the means to be resilient and sustainable over the coming decade.

“All these solutions aim at improving the sector's carbon footprint and are part of the ‘farm to fork’ approach to sustainable food production,” the organisation stated, “where the use of synthetic products is systematically limited as much as possible.”

Although the European banana market has grown in recent years, more than 95 per cent of the growth has gone to Latin American producers, according to Afruibana.

“While in 2013 dollar bananas already accounted for 69.1 per cent of the European market, the sharp build-up in their production capacities, combined with deregulation and an increase of supermarket bargaining power have jointly led to massive growth in their relative market shares, now standing at 75.5 per cent,” it stated. “Over the same period (2013-2020), despite considerable efforts to improve competitiveness, African producers saw their market share fall from 10.1 to 8.9 per cent, that of Caribbean producers in the ACP area from 9.5 to 6.8 per cent, while that of European producers slid from 11.3 to 8.9 per cent.

“It should be noted, however, that while exported volumes of bananas to the EU increased, this glut has led to a significant drop in price. Whereas in 2015 the average import price was €14.30/carton of bananas, in 2020 it dropped to €11.70, thereby seriously jeopardising all origins, even Latin America.”

The EU and the Organisation of African, Caribbean and Pacific States (OEACP) initialled the post-Cotonou agreement on 15 April, and Afruibana said that African producers were now hoping to find common tools with their European partners to contribute to African agricultural development.

“During the Appeal of Abidjan in 2019, we made a clarion call regarding the risks of liberalising the European market without proper regulation,” said Jean-Marie Kakou Gervais, vice-president of Afruibana. “Today, our predictions are proving unfortunately true. The glut of dollar bananas and the aggressive purchasing policies of European supermarkets are rapidly destroying sectors that are essential to the economic development of African rural areas.”

“The integration of the Sustainable Development Goals in the post-Cotonou agreement is a good thing, but it must be accompanied by some political coherence on the European side,” added Joseph Owona Kono, president of Afruibana. “Between the stated objectives of the EU's development policy and the practices of its trade policy, there must be consistency and harmonisation, in order to preserve the sectors that create wealth and jobs on the African continent and before the climate emergency, which has not been precipitated by our continent, puts our agriculture even more at risk.”