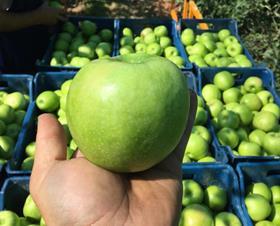 Improved production techniques are fuelling Albania’s burgeoning apple export industry. In 2010 the country didn’t sell any apples overseas but in 2019 it exported a total of 13,000 tonnes of apples with a value of US$1.2m, an increase of 18.6per cent on the previous year. Of these, an estimated 5,770 tonnes were sent to the European Union, a rise of 309 per cent on 2018.

Fruit production makes an important contribution to Albania’s agricultural sector, accounting for around 20 per cent of the total agricultural output. Apples are one of the main fruits grown in the country and exports, although still modest, are rising as improved cultivation techniques bring about better quality.

Albania also ranks as a one of the biggest consumers of apples in Europe. According to statistics published by the Ministry of Agriculture and Rural Development, apple consumption in Albania stands at 25kg per capita, compared with an average of 19kg per capita across the European Union.

The most widely grown varieties are two derivatives of Red Delicious, Red Chief and Starking. Together they make up about 52 per cent of Albania’s apple output, while Golden Delicious accounts for a further 42 per cent of production. Other varieties grown to a lesser extent are Gala, Mutsu and Granny Smith.

The two main growing areas are Korça, in the south east of the country, and Dibra, which are home to around 70 per cent of Albania’s total apple production. Crucially, the climatic conditions there mean very little pesticide spraying is required, allowing Albanian apples to be grown naturally.

Production has increased dramatically in recent years – rising from 12,000 tonnes in 2000 to 105,900 tonnes in 2019. This increase has been driven by an expansion in the cultivated area, as well as by increasing productivity, which reflects both improved growing technologies and technical knowledge. In all there were 4,407ha of production in 2019, up from 4,294ha the previous year, an increase of 2.63 per cent.

Improved production and quality standards mean that for the past decade, Korça has also exporting apples – mainly to neighbouring countries like Kosovo, Montenegro and Northern Macedonia.

More recently, Albanian apples have attracted the attention of other major European markets including Bulgaria, Greece, Austria and Germany. Greece is the main importer, taking around 67 per cent of the total export volume, followed by Bulgaria with 12 per cent and Serbia with 10 per cent. Further afield, Saudi Arabia, Egypt and Pakistan are other potential markets of interest.

Since 2000, the EU has been granting autonomous trade preferences to all the countries in the Western Balkans, allowing nearly all exports to enter the EU without customs duties or limits on quantities. At the end of 2020, these preferences were extended for another five years, providing more opportunities for farmers in the region to sell their products in the EU.

Together with financial support from the government, which sees horticulture as a priority sector with regard to trade, exports of Albanian apples look set to keep on growing in the coming years.