Another record year for Peruvian blues 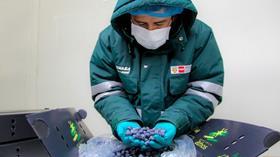 General manager Luis Miguel Vegas, said 52 per cent of the positions were occupied by women.

“This decentralised development has been due to the production of blueberries in regions such as Ancash, Cajamarca, Ica, La Libertad, Lambayeque, Lima, Moquegua and Piura, and has also been accompanied by investments in infrastructure and social programmes to improve education levels, health and well-being in production areas,” Proarándanos said.

In 2016, only around 13 varieties of blueberry were harvested in Peru, while today, it is estimated that there are 60 different varieties grown nationwide.

To the end of November, 73 Peruvian companies had shipped 175,574 tonnes of fresh blueberries, an increase of 36 per cent on last year.

A further 51,634 tonnes and 23,612 tonnes were destined for Europe and China respectively, representing growth of 11 per cent and 75 per cent.

India, which recently opened for Peruvian blueberries, has absorbed 26 tonnes of airflown blueberries so far this season.