Antwerp continues to bounce back 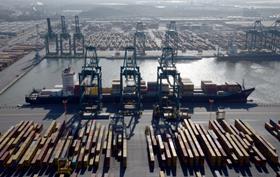 The port of Antwerp has announced that total throughput decreased by 4.4 per cent during the first nine months of 2020 when compared to last year.

Thanks to container handling, which has maintained the status quo and has been picking up since July, the port has been able to limit the damage caused by the decline in the throughput of all goods flows.

'Compared to most other ports in the Hamburg-Le Havre range, the port is holding up very well,' the Port Authority outlined. 'Despite the impact of the corona crisis on global production and logistics chains, and the following worldwide drop in demand, the port of Antwerp is holding strong in these very difficult times.'

Since July, larger volumes have been recorded in container handling again, after hitting lows in May and June.

In September, throughput surpassed 1m TEUs again for the first time since April. In the third quarter, growth occurred mainly in container traffic to the Far East and within Europe.

As a result, container traffic remained almost unchanged on an annual basis, with a drop of 0.2 per cent in TEU compared to last year.

Both global trade turmoil and the corona crisis continue to have a clearly negative effect on goods flows in the conventional break bulk segment, and while conventional throughput of fruit did grow, these volumes were 'rather limited'.

'The impact of the standstill of the global supply chain as a result of the corona crisis can still be felt,' said Jacques Vandermeiren, port of Antwerp chief executive. 'The prospect of Brexit also leads to uncertainty in the market.

'Thanks to container traffic picking up, the impact on the total throughput in Antwerp remains limited,' he continued. '2020 will certainly not be a record year like the past seven years, but thanks to our resilience and container handling we are able to limit the damage.'