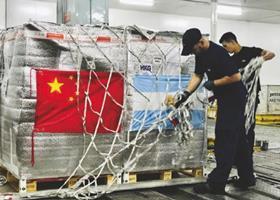 The run up to a new season is an anxious time for Patagonia’s cherry producers, who are forced to run the gauntlet of hail and spring frosts that can potentially wreak havoc on the new crop. This season has been no exception, and as a series of heavy frosts descended on the regions of Río Negro y Neuquén in September, growers faced a nervous wait to find out what the impact had been on the crop.

Fortunately, they have escaped largely unscathed and expectations at the outset of the season were running high. “This has been an exceptional year quality-wise and we’re very positive about the new campaign,” affirms Matias Notti, commercial manager of Extraberries.

The company has spent significant amounts in recent years to protect its farms from the rain, hail and strong winds that characterise the Patagonian climate, and this investment appears to be paying off.

The company grows its cherries in two locations, Chimpay in Río Negro and Sarmiento, situated in the far south of Patagonia. Together, these allow it to cover the whole of the Argentine production season.

“Argentina has many climates, and new investments are helping to expand our production window,” says Notti. “With the right management of technology and logistics we are now able to supply the market with premium cherries from November right through to the beginning of March.”

What has been missing up to now, he says, is the demand, but this is now changing. This will be Argentina’s first full season in China since that market opened at the end of 2018 and hopes are high that the market – the biggest global importer of fresh cherries – will be a lucrative outlet for exporters.

Having carried out the inaugural airfreighted shipment of Argentine cherries to China in January last year, Cerezas Argentinas is one of the growers leading the push into this new market. It is the only company in Argentina whose facilities enable it to subject the fruit to cold treatment prior to shipment (the terms of the protocol stipulate a 16-day cold treatment requirement), but according to Notti this is not a feasible option. Instead the company has opted to concentrate on sea shipments, unless and until Patagonia is recognised as being free from fruit fly and the cold treatment requirement is removed.

Notti notes that the level of interest shown in China for Argentine cherries has so far been very high. “We’ve already closed programmes with a number of importers and we’re receiving orders every day from new customers. They like our fruit and want us to supply it – the challenge now is for us to find the right partners,” he says.

Such is the level of demand in China that Shanghai-based importer Fruta Cloud predicts that the country will become a top cherry market for Argentina, in spite of the challenges posed by the cold treatment requirement and 10 per cent tariff that Argentine cherries are subjected to. Yet in spite of its allure –cherry prices in China far outstrip those that can be achieved in other markets – Notti sounds a note of caution.

“Much like Australia, which also gained access to the Chinese market recently, our cherry volumes are limited and given the level of Chinese demand it could potentially buy up our entire crop, but we won’t be sending 100 per cent of our production there,” he says.

“We need to take care of the relationships we have developed over many years in other markets like the US and Europe, even though the returns might be lower. Our retail customers in these markets understand that the business has changed, and that we must all adapt to this new scenario.”