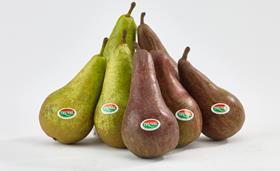 In 2021, Belgian fruit cooperative BFV celebrated the tenth anniversary of the arrival of its Conference pears on the Chinese market. Not only is the green Conference doing “great” in China, according to commercial director Marc Evrard, but hopes are high for the new red Conference variety, despite the multiple challenges presently facing each and every business.

“We’re always a little apprehensive at the start of the season, as there are a lot of challenges,” said Evrard. “Shipping is slightly irregular, with certain Covid-related procedures. But the response to the red Conference has been very good. In many places we are able to continue our marketing campaigns, online and offline, and we are doing tastings nationwide in China. We’re currently shipping to five or six different ports in the country.”

As many multinational companies do with new products, BFV and its main import partner in China, Dole, chose to debut the red Conference pear at November’s China International Import Expo (CIIE), a large-scale national exhibition with imports as its theme. The introduction of the red Conference pear to China in its first year of harvest clearly shows BFV's confidence in the market.

Evrard said he believes that red Conference pears, with their more delicate fragrance and texture, will also gain popularity among Chinese consumers.

“The presentation of the red Conference at this year’s CIIE generated a lot of buzz in the market, which was great,” he revealed. “We expect there to be a cross-pollinating marketing effect, boosting interest also in the green Conference. It was picked up by the mainstream media and nationwide TV, which had a good impact. We don’t yet have big commercial volumes, but you have to start somewhere.”

BFV is heavily engaged in online advertising and marketing, including efforts to create additional visibility at wholesalers and at retailers, as it seeks to maintain its leading position on the market.

“We were the first to appear in China with Western style pears,” recalled Evrard. “After that, we watched the arrival of pears from the US, the Netherlands, Chile and many others. Yet Belgium still represents 50 per cent of western style pear imports in China, and from Belgium BFV represents around 95 per cent.”