Cause for concern at RSA ports 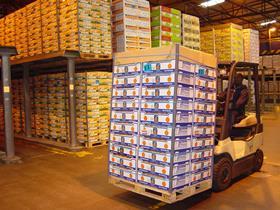 Previous concerns about the availability of containers and slow loading operations in some ports are materialising as the South African citrus and apple industries are moving into their peak shipping period.

Sources in logistics circles say that the South African industry will have to take whatever measures it can to safeguard the markets it has built up over the years.

Logistics service providers have warned for some time that there could be shortages after the Easter weekend when the demand for containers increases because of the growth in citrus deliveries.

Although more berths have been opened up in Durban, Ngqura in the Eastern Cape and Cape Town, logistics sources say the problems continue.

Shortages are attributed to the fact that ports have cut their operations as a result of the government lockdown, operating a single berth at most facilities and reduced hours of working.

As a result, containers could not be dropped off in South African ports at the same tempo as last year, while loading and the normal arrivals of vessels have also been affected.

With the government announcing that the lockdown would be extended until the end of April, it also revealed measures to ensure that the import and export of essential consignments are not delayed.

Further announcements about the lockdown and measures to support the South African economy will emerge this week.

“The Port of Ngqura announced that it would be implementing work teams working three shifts of eight hours a day from last Friday,” says the CGA’s Mitchell Brooke.”It will make a significant difference in reducing vessel working times.”

In some of the ports two berths are now made available for vessels.

“The latest information indicates that things have improved significantly in Nqqura. It is expected that the mobile container cranes in Port Elizabeth Container Terminal will be in full operation by the first week of May.”

Brooke says that operations in Durban were still running well. “We have started taking in the first citrus fruit for the first vessel to be co-loaded for Japan and China and she will commence loading at the end of the week.' This will also be the start of the South African grapefruit export season.

During the past 20 years containers have firmly entrenched themselves as the favoured mode of exporting fruit from South Africa. However, conventional reefers have been used effectively in servicing special markets where special phytosanitory regulations apply.

In the present Covid-19 environment, and with difficulties experienced with loading and shipping containers, conventional reefers may well make a comeback.

“It is not a problem with the availability of container vessels or enough containers,' Brooke outlines. 'The problem lies squarely with the port operators who fail to deal with a number of issues in the ports.”

For all shippers it is not just a simple matter of switching from containers to conventional reefers. The pallets used in reefers are lower, resulting in fewer cartons being shipped on a pallet, which increases the cost of freight considerably.

“Some growers and exporters are resisting switching between these modes of shipping as it is a huge disruption in the packhouse and the logistics chain, but we are telling them that it may well be the solution for this year’s challenges,” says one logistics service provider.

The present situation affects exporters and growers across a wide scope. Sources say taking containers backwards and forwards between Cape Town and Port Elizabeth to make use of the best shipping opportunities brings enormous cost to the industry.

Customs offices are only open for a limited time every day and there are limited couriers to take documents to receivers overseas to effect clearance on their side.

“We all know what the purpose of the fight against Covid-19 is, but when the government take certain decisions it is not properly implemented at ground level.'

It is unusual to see a conventional reefer vessel loading in Cape Town for shipments to Europe at this time of the year, and yet that happened last week with a shipment of apples, before the vessel continues to Durban where it will load citrus for the European market.

The South African industry has long urged the government to consider privatising the export terminals. They now say that the problems which have been brought to the surface by the lockdown and reaction to it will hopefully advance the idea of public and private sector partnerships to help solve these problems.