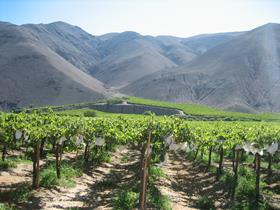 The consortium unveiled three strains, two seedless and one seeded, which are at an advance stage of development and could become commercial varieties, and said it hoped to have four more new varieties ready for commercial production in 2018.

“Today is about demonstrating the advances in the programme to the members of the consortium,” said Dr Patricio Arce from the Pontifical Catholic University of Chile, who is charge of the programme. “We are presenting three strains – two seedless and one seeded – which are at an advanced stage of development and very close to becoming commercial varieties, and have another seven at the pre-selection stage which are currently undergoing evaluation.”

According to Arce, all the selections have one thing in common which sets them apart from other varieties being developed internationally and that is their resistance to Botrytis.

“It is vitally important for our growers to have access to new varieties that are able to withstand the long transit times involved in reaching distant markets such as Asia while meeting the requirements of the market in terms of quality and flavour,” said Asoex president Ronald Bown.