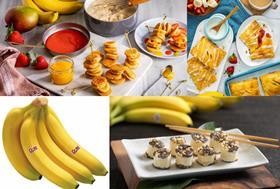 Dole has revealed that it is devoting its 'Healthier by Dole' alternative recipe series in April to bananas, in honour of the fruit’s position at the centre of two observances during the month.

The company kicked-off a month-long tribute to the banana as part of its celebration of National Banana Day on April 20, which it has again extended to five full days of festivities from 18-22 April, and April’s designation as Stress Awareness Month.

According to Dole, the latter serves as a reminder about the science-backed link between bananas and the alleviation of stress.

“From their position as a breakfast and brown bag lunch staple to the banana bread-baking revolution that happened during Covid-19, bananas are enjoyed by 90 per cent of Americans – making them the most popular produce and one of the most-purchased items in the supermarket,” said Melanie Marcus, Dole’s nutrition and health communications manager.

According to Marcus, many of those who experienced heightened stress during the past two years discovered the banana’s 'comforting familiarity' and potential ability to improve mood and relieve anxiety.

“Bananas contain vitamin B6, which is involved in the creation of feel-good neurotransmitters like dopamine and serotonin, and research suggests that they can also reduce inflammation and oxidative stress levels,' she continued. 'Another study found that foods like bananas that contain prebiotics (a type of fibre that feeds probiotics, the healthful bacteria inside your gut) may also promote more restful sleep.”

In addition to the banana-centric recipes, Dole is releasing original social and blog content 18-22 April for National Banana Day and spotlighting some of the hundreds of recipes, serving suggestions and usage tips for the fruit online.