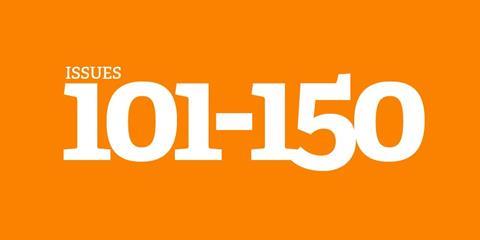 Here, in the third of ten special timelines due to be published online between now and the first week of November, we chart some of the key developments in the European fruit and vegetable market. In total, we have selected one story from each of our 500 issues; below, you can see the top stories from issues 101-150.

#101July 1981
Europe's apple market is in turmoil as high volumes of Chilean and Argentinean fruit clash with stored European supply.

#102August 1981
A rise in easy-peeler production fuels a 24 per cent rise in earnings for the Citrus Marketing Board of Israel.

#103September 1981
A report on the European melon market reveals that demand is highly seasonal and there is huge potential to grow consumption during the winter months.

#104October 1981
US citrus giant Sunkist is reportedly mulling a move into new product groups, including potatoes, kiwifruit and Mexican mangoes.

#106December 1981
Dutch fruits and vegetables are commemorated on a new 60 cent stamp.

#110April 1982
The EEC announces a trade embargo with Argentina following its invasion of the Falkland Islands – just as the topfruit season hits its peak.

#111May 1982
Banana growers in the Windward Islands and Jamaica are on a state of alert after reports that a destructive new fungus disease, Black Sigatoka, is spreading northwards across Latin America.

#112June 1982
A new study by the US National Academy of Science says high consumption of fruits and vegetables can help protect against cancer.

#113July 1982
Turkey’s government announces a US$40m investment programme to develop the country's fruit and vegetable exports, with the aim of becoming a major supplier to Europe within five years.

#116October 1982
Severe flooding in south-east Spain leaves 43 dead and causes more than £90m of damage to agriculture and infrastructure.

#118December 1982
Brazil launches a major marketing push for its exotic fruit offer in the UK.

#120February 1983
The first ever fruit consignment from Chile to the US shipped in refrigerated containers arrives in Camden, New Jersey.

#122April 1983
Chilean grape exports to Europe are on course to smash through the 2m carton barrier for the first time.

#123May 1983
Cyclones in Central America and drought in Africa lead to a banana shortage in France, with ripeners operating at just 50 per cent capacity.

#124June 1983
The Polish and Czechoslovakian potato industries are under threat following reports of sightings of the Colorado beetle.

#126August 1983
The demise of English cherry production is blamed on poor management and a lack of rinvestment.

#128October 1983
Archanes Credit Cooperative leads the charge to establish Cyprus as a major supplier of autumn grapes to the UK by starting a fast weekly service to Dover.

#130December 1983
Tesco launches a freshly squeezed orange juice, with no added vitamins, minerals or preservatives, that it claims will revolutionise the £240m-a-year UK juice market.

#138August 1984
Mack Nicol of the New Zealand Kiwifruit Authority says the country is on target to produce 60m trays by 1990.

#141November 1984
Outspan reveals that its exports to the Far East have doubled in just one year to around 80,000 cartons.

#142December 1984
Zeebrugge is to replace Southampton as the first port of call for South African fruit consignments heading into Europe.

#144February 1985
New company Dole Citrus sets out to market around 12m cartons of citrus via newly acquired packhouses in Florida, California and Arizona.

#145March 1985
Sidney Garber receives the 500-millionth carton of Cape-branded fruit from South Africa on behalf of the UK produce trade.

#147May 1985
Holland's Naaldwijk Research Station reveals it is experimenting with growing lettuce on water beds and increasing the sweetness of melons.

#148June 1985
Canary Island producers are unhappy with quotas due to be placed on their exports to Europe when Spain joins the EEC.

#149July 1985
Israeli marketer Agrexco says it is planning to test market a small, green-striped, yellow-fleshed watermelon, as well as a seedless variety.