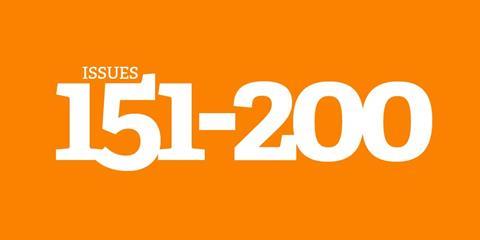 Here, in the fourth of ten special timelines due to be published online between now and the first week of November, we chart some of the key developments in the European fruit and vegetable market. In total, we have selected one story from each of our 500 issues; below, you can see the top stories from issues 151-200.

#151September 1985
Ceremonies are held to inaugurate the new port of Zeebrugge as well as its Niew-Zeelandkaai and Kiwiweg areas, home to the new BNFW terminal.

#152October 1985
The Dominican Republic is planning to start shipping pineapples to Spain, France and other European countries.

#156February 1986
California unveils a new red, white and blue logo featuring stars and stripes, to be used as part of its European promotions.

#159May 1986
Year-round supply of European strawberries may soon be a reality as Spanish growers plant earlier varieties and the Dutch use new techniques to extend their season.

#161July 1986
Consumption of Italian strawberries has been gravely affected by the Chernobyl disaster, which reportedly blew radioactive clouds over Emilia-Romagna.

#163September 1986
The ongoing trade spat over US citrus exports to the EEC seems to be coming to an end.

#164October 1986
Geest, the UK's largest fresh produce importer and distributor, celebrates its 50th anniversary and prepares for a public listing in late 1986.

#167January 1987
The Citrus Marketing Board of Israel pins its hopes on new Jaffa-branded varieties including Sweetie, a green-skinned grapefruit.

#170April 1987
The construction of a new container terminal in Antwerp gets underway this month.

#171May 1987
Mass production of the so-called Freshtainer, a controlled atmosphere shipping unit designed for fruit, has started.

#175September 1987
Herbert Scholdei of German importer T Port says he is 'very impressed' with the redeveloped Port of Zeebrugge.

#179January 1988
Coca-Cola's plan to develop a US$120m citrus orchard in Belize has been shelved following opposition from environmental groups.

#180February 1988
A major restructuring of the Côte d'Ivoire's pineapple trade, which supplies more than 90 per cent of Europe's pineapples, is creating uncertainty among importers.

#183May 1988
The Washington Apple Commission has appointed George Smith, former Potato Marketing Board officer, as its UK promotions director.

#186August 1988
The battle over the future of Europe's banana trade begins, with talk of a boundary-free European market by 1992.

#188October 1988
Growth and consolidation of supermarket power is the main theme of this month's Eurofruit Congress in London.

#190December 1988
Cypria, a new national brand for Cyprus fresh produce, is set to be promoted by a series of television commercials and a widespread outdoor poster campaign.

#191January 1989
The New Zealand Apple & Pear Marketing Board has acquired Belgian company Fibe Trade, which will be responsible for marketing NZ topfruit in Europe.

#194April 1989
Dole is working with agency Springer & Jacoby to launch a pan-European advertising campaign for fruit.

#195May 1989
Food safety becomes a hot industry topic following a scandal over the use of growth regulator Alar in the US apple sector.