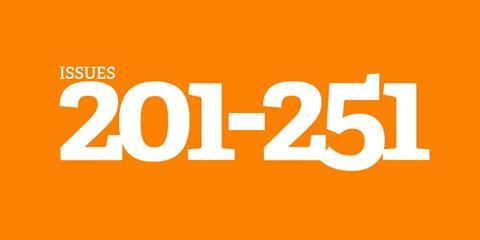 Here, as we approach the halfway point in our special 500-issue timeline, we continue to chart key developments in the European fruit and vegetable market featured in each of our previous issues. Below, you can see what the key stories were in issues 201-250.

#208June 1990
Upmarket British retailer Marks & Spencer says it plans to expand in France and Spain as well as moving into the Netherlands, Belgium and West Germany.

#218April 1991
Chiquita is to open offices in Poland, Czechoslovakia and Hungary, while the NZ Kiwifruit Marketing Board centralises its European sales operation in Antwerp.

#219May 1991
Growers in South Australia are using Everfresh, a new plastic film wrap made partly from volcanic rock, to keep fruit and vegetables fresh.

#220June 1991
The European market for organic food, currently valued at £943m, is forecast to grow by 25 per cent per annum over the next five years.

#224October 1991
A new 500m2 fruit handling centre run by Hamburger Hafen- und Lagerhaus has opened at the Port of Hamburg.

#225November 1991
Klaus Pape of German distributor Atlanta tells Eurofruit the firm has opened an office in Moscow to develop the USSR market.

#226December 1991
The creation of UK-based Fresh Fruit Services to coordinate logistics for South African exporters Unifruco and Outspan hints at wider consolidation in the supply chain.

#228February 1992
Europe is to receive its first-ever shipment of bananas from Peru.

#229March 1992
Stonefruit growers in California are trialling a laser refractometer that allows monitoring of sugar and starch levels without damaging the fruit.

#230April 1992
Brussels remains the focus of intense negotiations over the future of the EC's banana tariff regime, with 38 leading industry players calling for a free market.

#231May 1992
Italian company Kiwi Uno is investing in Chilean production to ensure year-round supply for its customers.

#232June 1992
Washington state grower-exporter Stemilt is strengthening its position in Europe with the appointment of Steve Pauly as its regional representative, based in Belgium.

#235September 1992
Europe produces its largest apple crop for several years, leading to a crash in prices.

#241April 1993
The EC has surprised fruit importers and their suppliers by introducing measures – including licences – to control the apple market.

#242May 1993
Fyffes has apparently rejected a multi-million dollar offer by Dole Food to buy the Irish importer.

#245August 1993
Banana prices in Germany have risen 40 per cent in some cases after the introduction of the EC banana regime's new tariff quotas.

#247October 1993
A group of South African exotics exporters and growers is lobbying the government in protest against Unifruco's JV with sub-tropical exporter Sikisa Trading.

#248November 1993
Five Chilean companies have formed a marketing and shipping alliance that will control 12 per cent of the country's fruit export volume.

#250February 1994
Hispafruit and Royal Van Namen merge to form one of The Netherlands' largest fresh fruit and vegetable companies.