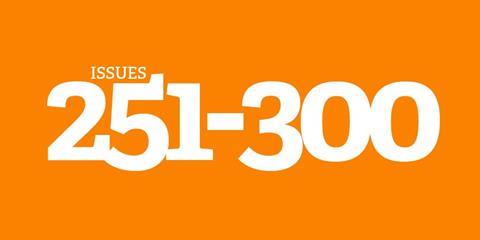 We have selected one important story from each of our previous issues, giving you a snapshot of key developments in the European fruit and vegetable market during the course of our 44-year history. Below, you can see what the key stories were in issues 251-300.

#251March 1994
As recession continues to bite and a supermarket price war breaks out, the Fresh Fruit & Vegetable Information Bureau launches a new generic campaign to boost consumption in the UK.

#253May 1994
Following a successful trial, Chile is set to extend its first ever generic promotional campaign outside test markets Belgium, Germany and Scandinavia.

#254June 1994
The USDA has granted approval for the genetically altered Flavr Savr tomato, which does not produce a rotting enzyme.

#260December/January 1994-1995
Spain's top exporter, Anecoop, consolidates its position in European citrus following a trading agreement with Lütacofrucht in Germany and the opening of the IFS distribution platform in Perpignan, France.

#261February 1995
Capespan sets out on a new course after October's merger of Unifruco and Outspan's European operations.

#262March 1995
Buoyant domestic demand is expected to reduce Brazilian apple exports to Europe by a third.

#273March 1996
An increase in global demand for labels, attributed to US supermarkets' requirement for individual fruit identification, encourages Sinclair International to expand its manufacturing capacity. Elsewhere, Fyffes acquires 50 per cent of Milan-based Peviani.

#274April 1996
Southampton becomes the UK's biggest fruit port, thanks to imports of tomatoes from the Canaries and bananas from the Windward Islands.

#277July 1996
Unacoa invests in a massive packing and distribution facility outside Ferrara.

#279September 1996
In the UK, Safeway becomes the first retailer to sell own-brand bananas.

#283February 1997
Israel plans full-scale deregulation of exports, including the privatisation of Agrexco.

#284March 1997
Dole pulls the plug on Dominican Republic pineapples and moves its production to Costa Rica.

#285April 1997
Anecoop says it wants member cooperatives to commit at least half of their volumes to the the company within the next few years.

#286May 1997
A number of Europe's leading supermarket chains have started selling fair trade bananas sourced by the Max Havelaar Foundation.

#287June 1997
Eurofruit reports on the arrival of the first Zespri-branded New Zealand kiwifruit in Europe.

#292November 1997
Dole makes a significant move in France with the acquisition of eight ripening rooms belonging to Compagnie Fruitière.

#293December/January 1997-1998
Harvesting of apples in South Africa is due to get underway in mid-January, the earliest start for many years.

#294February 1998
Zespri reports strong results for its inaugural European campaign, with NZ kiwifruit sales in Germany over 10m trays for the first time.

#295March 1998
Protected geographical status is granted by the EU to pears, peaches and nectarines grown in the Italian region of Emilia-Romagna.

#297May 1998
Belgian fruit and vegetable producers unite under the Flandria marketing label.

#300 August 1998
Keelings has been appointed partnership supplier and consolidator to Tesco Ireland.