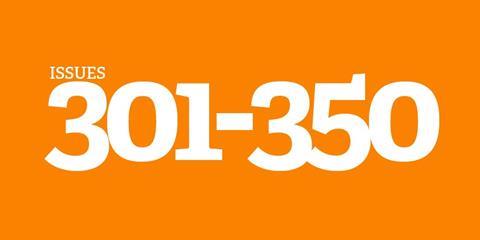 We have selected one important story from each of our previous issues, giving you a snapshot of key developments in the European fruit and vegetable market during the course of our 44-year history. Below, you can see what the key stories were in issues 301-350.

#301 September 1998
Del Monte will begin sourcing from a new subsidiary in South Africa following the purchase of Trifrutas Holdings.

#302October 1998
New Zealand kiwifruit marketer Zespri is running market trials in the UK for a new golden variety of kiwifruit.

#303November 1998
Fyffes subsidiary Lembcke has expanded its business in Denmark with the acquisition of Olesen Import.

#304December/January 1998-1999
A new generation of mini-barcodes for use on small individual items is set to revolutionise fresh produce identification in stores worldwide.

#305February 1999
Chile's fresh fruit industry revamps its image with a new logo, and harmonises quality standards as it prepares to target Europe.

#306March 1999
French prepared salad and vegetable producer Soléco unveils plans to build a factory in the UK, its first outside France.

#308May 1999
The UK government begins a consultation to toughen up regulations on pesticide use in agriculture.

#310July 1999
UK retailer Sainsbury’s launches a major revamp, including the use of a vibrant new orange colour for its logo and a new corporate statement, ‘Making life taste better’.

#312September 1999
Denmark’s AP Møller confirms its subsidiary Maersk Line is to buy the international shipping business of Sea Land Service for US$800m, doubling capacity on routes to and from the US.

#315January 2000
China exports kiwifruit to Europe for the first time in its history.

#318April 2000
The WTO tells Ecuador it can to impose sanctions on the EU as a result of rulings against its banana import regime.

#319May 2000
Chile signs agreements to export table grapes, apples and kiwifruit to China.

#320June 2000
Zespri prepares for a pan-European launch of Zespri Gold.

#322August 2000
A report from Forrester Research predicts that by 2005 over 6 per cent of all business-to-business trade in Europe will be through online exchanges.

#323September 2000
Europe’s exotics sector continues to grow steadily as suppliers gear their operations to the demands of the supermarkets.

#325November/December 2000
The EU sends 200 tonnes of produce to Israel duty free after much of the latter’s supply is cut off due to fighting in Gaza and the West Bank.

#326January 2001
The World Apple and Pear Association is officially launched.

#329April 2001
Spanish firm Unexport is to open six new subsidiaries in Germany, Poland, Hungary, the Czech Republic, the US and Canada over the next two years.

#334September 2001
Export association Coleacp is to implement the European Commission’s Pesticides Initiative Programme (PIP) for the benefit of the ACP horticulture sector.

#336November/December 2001
Border closures in the Middle East following the 9/11 attacks in the US have led to a banana glut in Mediterranean.

#337January 2002
The 142 members of the WTO finally approve China and Taiwan’s accession to the trading body, 15 years after their initial bids.

#338February 2002
The Greenery acquires the Minnaar Group as part of a strategy to bring member growers closer to its major food retail customers.

#340April 2002
NZ apple deregulation kicks in, with a number of different brands arriving in Europe for the first time.

#341May 2002
The Greenery agrees the sale of Verdi to South African Fruit Exporters, while Citronas acquires Dutch topfruit marketer Kardol.

#342June 2002
Costa Rica’s banana exports are expected to fall by as many as 7m boxes following torrential rain and flooding in the Limón area.

#343July 2002
Turkish exporter Alara Agri expects to ship around 2,500 tonnes of cherries to the UK this year, a 40 per cent increase.

#344August 2002
British high court judges rule that European regulations on the sale of fruit and vegetables, including prohibitions on ‘bendy’ produce, have no legal standing in the UK.

#346October 2002
Pakistan’s fruit exports have soared by 300 per cent in the previous two years as a result of an aggressive marketing strategy pursued by the Export Promotion Bureau.

#347November/December 2002
A group of 16 Italian companies come together to form Mediterranean Fruit Company (MFC), an association dedicated to bringing Italian produce to a wider international market.

#348January 2003
Still part of International Green Week, Fruit Logistica attracts 855 exhibitors from 43 countries. By 2004 it would become a stand-alone event.

#349February 2003
The world’s first Fairtrade pineapples go on sale in UK, supplied by Asoproagroín for the Coop.