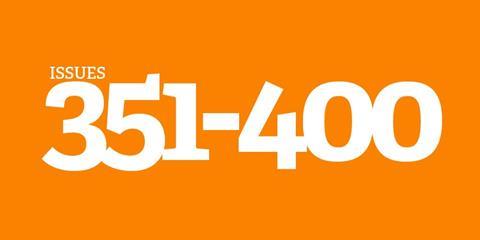 We have selected one important story from each of our previous issues, giving you a snapshot of key developments in the European fruit and vegetable market during the course of our 44-year history. Below, you can see what the key stories were in issues 351-400.

#351April 2003
Italy’s Apofruit and Generalfruit announce plans to merge within 12 months due to rising costs.

#354July 2003
The Chilean Fresh Fruit Association buys the rights to a number of citrus varieties managed by the Citrus Marketing Board of Israel.

#359January 2004
Del Monte boosts its presence in eastern Europe with the acquisition of Polish fruit and vegetable distributor Expans.

#362April 2004
Medway Ports signs a deal with Chiquita to build a new ripening facility at the UK port of Sheerness.

#368October 2004
Prince de Bretagne plans to ship a record 72,000 tonnes of tomatoes, making it one of Europe’s top tomato distributors.

#370January 2005
The EU adopts a new banana import system, with Most Favoured Nations subject to a €176 per tonne levy and ACP suppliers granted a duty-free annual quota of 775,000 tonnes.

#372March 2005
The EU and Israel agree to identify whether produce is cultivated in Israel or in the Occupied Territories.

#374May 2005
Freshfel Europe calls on policymakers to harmonise food safety and quality rules across the EU, including MRLs.

#377August 2005
The EU postpones plans to harmonise minimum apple sizing and maturity with global standards, much to the delight of the EU apple trade.

#379October 2005
Chiquita becomes the first fresh produce company to use the Rainforest Allance seal on products in Europe.

#382February 2006
Cabinet Levesque's Fabrice Levesque tellsEUROFRUITthat Russian consumer purchasing power is on the up, with demand for high-quality goods rising.

#384April 2006
After a 25-year absence, bananas return to the Port of Rotterdam on Seatrade's Seaban service from Costa Rica.

#385May 2006
As Fyffes forms a joint venture with India's Suri Fruit, the first Capespan-branded Indian grapes are sent to Europe.

#393February 2007
Following its demerger from Fyffes, Irish group Total Produce ties up a €23m deal for Redbridge Holding in the UK.

#396May 2007
Academics from across Europe use the EGEA Conference to call for action to be taken to fight obesity “epidemic”.