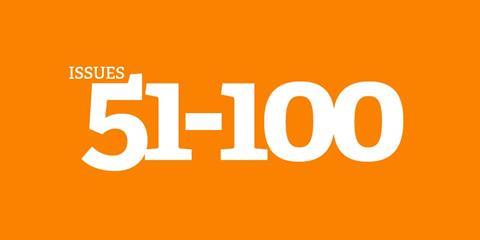 Here, in the second of ten special timelines due to be published online between now and the first week of November, we chart some of the key developments in the European fruit and vegetable market. In total, we have selected one story from each of our 500 issues; below, you can see the top stories from issues 51-100.

#51May 1977
European importer association CIMO publishes a memorandum calling for urgent reform of the EEC Common Agricultural Policy, claiming that money used to fund withdrawals from the market and the destruction of produce would be better spent on quality improvements and sales promotions.

#53July 1977
The first ever container of South African avocados arrives in the Port of Rotterdam.

#54August 1977
Belgian New Fruit Wharf holds a party to celebrate New Zealand apple shipments to Continental Europe hitting the 1m-carton mark for the first time ever in a season.

#56October 1977
A report predicts that Saudi Arabian fruit and vegetable imports could grow by 15-20 per cent a year, thanks to better port and air infrastructure and a greater number of regular suppliers.

#57November 1977
Moscow's new fruit and vegetable market opens for business. The 60,000ft2 market is set out on two floors and has room for 800 stalls.

#58December 1977
Eurofruit reports on the growth of Polish greenhouse production from a current 1,000ha to 1,600ha by the end of the decade.

#62April 1978
The launch of Dufaylite's Floatpacker and Metromethods' M60 heralds the arrival of a new generation of automated apple packing machines.

#64June 1978
Scipio opens its new head office in Rotterdam. It will be in charge of coordinating and developing the group's business in Benelux, France, Denmark and the UK.

#65July 1978
Northwest Fruits in the US carries out its first trial shipment of cherries to Japan.

#66August 1978
A visit to the UK by Portuguese fruit and vegetable growers sparks a surge of interest from importers and retailers, who see strong potential to develop programmes of topfruit, citrus and vegetables.

#67September 1978
France's nascent kiwifruit industry is taking off, with production forecast to rise from 150 tonnes to 1,000 tonnes within three years.

#68October 1978
New Zealand's Citrus and Subtropical Council expresses extreme concern about competition in the kiwifruit industry, calling for a ban on exports of kiwifruit plants and grafting wood.

#69November 1978
The first ever Eurofruit Congress is held in Brussels.

#70December 1978
A report predicts that, by 1980, Germany will overtake France as the EEC country with the greatest proportion of food sold through hypermarkets.

#71January 1979
Sunkist unveils its first major rebranding since the label was introduced in 1908.

#75May 1979
Agrexco loses its monopoly on Israeli fruits and vegetables when the Ministry of Agriculture grants Shoresh a license to handle 30 types of vegetables.

#78August 1979
Official sources in Madrid announce that Spain is to start shipping apples to China, with plans to send 500 tonnes – mainly from Lérida – a month.

#80October 1979
More than 200 delegates gather in Brussels for European importer association CIMO's annual congress, at which the trade states its preference for palletised imports ahead of containerised cargo.

#82December 1979
United Brands, owner of the Chiquita banana brand, announces that it will sponsor the 13th Winter Olympics, to be held in Lake Placid in February.

#83January 1980
A study by Israel's Ben Gurion University shows that irrigation with saline water from aquifers under the Negev Desert produces sweeter-tasting tomatoes and cucumbers.

#84February 1980
Spain announces that the results of its first kiwifruit export season have been very positive, with fruit quality on a par with New Zealand's.

#86April 1980
The New Jamaica Terminal opens at Newport. The £800,000 facility will be used for a new weekly shipping service between the Jamaica and the UK.

#87May 1980
The collapse of apple prices caused by overproduction prompts growers in Switzerland conduct the first trial plantings of kiwifruit.

#88June 1980
United Brands announces that it will add Californian fruit to its programme of Chiquita-branded citrus following successful trials with Spanish fruit.

#89July 1980
French premier Valeira Giscard d'Estaing comes under fire from Spanish exporters after calling for Spain's entry to the EEC to be delayed.

#90August 1980
There are calls for a new generic banana campaign – the first since ‘Unzip a Banana’ in the 1960s – to boost flagging banana consumption.

#94December 1980
The Hammond Group, sole handler of fruit and vegetable cargoes at the Port of Dover, sees volumes rise 50 per cent to 120,000 tonnes in just 12 months, reflecting the port's growing importance as a point of entry into the UK.

#96February 1981
Despite continued tension in the Middle East, France reports a continued increase in exports to the region, with shipments totalling 35,000 tonnes in 1980.

#97March 1981
California capitalises on the failure of the Israeli avocado crop with a surge in exports to Europe.

#99 May 1981
Mexico ramps up airflown exports of melons, avocados, mangoes, pineapples, limes and stonefruit to Europe as it seeks to reduce its reliance on the US and diversify its export markets.