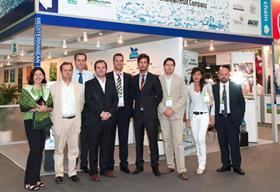 Italian exhibitors out in force at Asia Fruit Logistica 2012

Fresh produce companies from Europe and the Middle East have increased their presence at Asia Fruit Logistica, Asia's leading trade exhibition for the fresh fruit and vegetable business, which takes place on 5-7 September.

According to event organiser Global Produce Events – in which Market Intellgence, parent company of Eurofruit, Asiafruit and Americafruit magazine, is a partner – the number of exhibitors taking part from countries in the European Union and around the eastern end of the Mediterranean has risen considerably compared with last year.

Most notably, Belgium-based industry giant Univeg is set to take part as an exhibitor for the first time, while Italy's 29 individual exhibitors have helped to retain the country's position as Europe's largest representative at the show, second only to China with 87 companies.

Elsehwere, Portugal and Greece are set to have national pavilions at the event for the very first time, Turkey has reportedly expanded its combined exhibition space to more than 100m2 and Egypt's national stand is understood to have grown significantly following the country's debut in 2011.

After Australia with 24 exhibitors and the US with 23, Egypt is in fact the fifth-largest country at the trade fair with a total of 21 companies represented.

European countries continue to show a greater interest in developing fresh produce sales to markets in Asia, perhaps none more so than Italy which is looking to build in recent successful import agreements for its kiwifruit in China and South Korea.

Many of the Italian companies present will be located on the Piazza Italia stand, a familiar sight to those who have visited Fruit Logistica in Berlin.

The addition of Univeg to the exhibitor list, meanwhile, has been warmly received by the organisers, explained Global Produce Events managing director Gérald Lamusse.

'It's clear that Univeg is spreading its corporate message here and it is not afraid to do it forcefully,' he commented.