Event seeks to raise visibility of women in rural areas and promote awareness of equality, equity and diversity 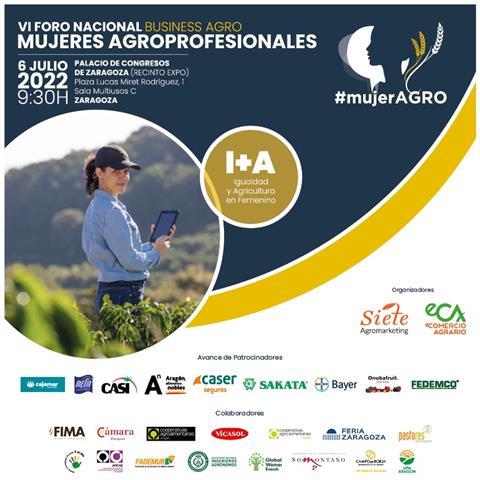 This is the sixth edition of #MujerAGRO

The VI National Business Forum for Women Agriprofessionals (MujerAGRO), will be held on 6 July at the Palacio de Congresos in the Spanish city of Zaragoza in Aragón.

Under the theme: ‘Equality and Agriculture for Women’, the event aims to promote awareness of equality, equity and diversity, and raise the visibility of women in rural areas, organisers Siete Agromarketing and eComercio Agrario said.

“We have been working for two terms to break the gender gap in the field. Women have always played a decisive role in rural areas, but they have never been recognised as they should be,” commented Joaquin Olona Blasco, Minister of Agriculture, Livestock and the Environment for the government of Aragón.

“From Aragón we have made a political commitment to increase the weight of women in the CAP and we have influenced the inclusion of the gender perspective in the new Strategic Plan through specific measures.

“But we must not forget that the maintenance of historical rights is a block in the progress towards gender equality and for this reason, from Aragón we have insistently requested its abolition.”

The minister stressed the need to take concrete measures to alleviate the gender gap in the agricultural sector and give women the recognition they deserve in the rural world. He said women make up just 25 per cent of the agrarian workforce in Aragón and hold very few executive positions in cooperatives, irrigation communities and other organisations.

During the event, the general director of Innovation and Agrifood Promotion of the Department of Agriculture, Livestock and Environment of the Government of Aragón, Carmen Urbano Gómez will participate as a speaker in a round table discussion entitled ‘Leaders in the Shadow: Rural Women’.

“It’s worth emphasising that a large part of rural entrepreneurship and innovation in this sector is female, there are multiple initiatives by women who develop their companies and professions with great success and who serve as an example to us,” she said.

“Although many of them are still doing a commendable job in the shadows, our goal is to make their talent visible and also encourage many others to become a more active part of the agri-food economic life of Aragon. We are a noble land full of opportunities.”

Ma Ángeles Benítez Salas, director of the Representation of the European Commission in Spain, will also be speaking at the event.