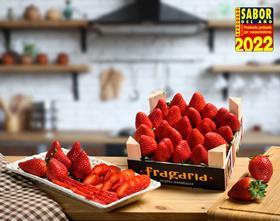 Fragaria, the strawberry brand from Barcelona-based Fruits Ràfols, has been awarded a prestigious Taste of the Year label.

The label, given to products tested by consumers in blind tasting trials carried out in laboratories specialising in sensory analysis, is regarded as one of Europe’s leading taste and quality brands.

For the second consecutive year, Fragaria achieved the highest rating, clocking up an overall satisfaction score of 9.11 after an evaluation of its taste, appearance, smell an texture.

“We’re proud and happy as this award shows that consumers opt for Fragaria because we’re doing a good job together, from the farmer to the pickers, packers or salespeople. This is an achievement of the entire chain,” said Helena Ràfols, the company’s human resources manager.

Catalan fruit marketer Ràfols created the Fragaria brand in 2018 with the aim of offering consumers a high-quality, large-sized strawberry, with a deep red colour and a consistent texture and extraordinary flavour.

As commercial director Carlos Jiménez explains, “we then looked for a single producer who would take care of the project, eventually joining forces with La Huerta de Doñana in Almonte (Huelva), where we currently have 20ha of the Splendor variety under production”. Jiménez said Ràfols is now testing other varieties and presentation options specially selected for the most demanding consumer.

Although production is strictly limited, Fruits Ràfols said it expects to increase its sales by 20 per cent to 250 tonnes in the current season, which runs from December through to May. The strawberry is sold throughout Spain, as well as being exported to countries such as France, Italy and Bulgaria.

Fruits Ràfols has significantly expanded its fruit offer in the last five years, launching a number of own brands including Fragaria for berries, Mantiana for selected apples from Austria, France, Italy and Spain, and Paso Lagarto for selected avocados from Peru, Mexico and Spain.

The company has also expanded its presence a Mercabarna, Barcelona’s main wholesale market, where it currently has six stalls, in addition to its central offices and a 2,000m2 controlled-temperature warehouse complete with ripening rooms with the latest CO2 technology.

At the end of 2021, it became one of only ten fruit and vegetable companies in Spain to obtain IFS Wholesale Plus V2 certification.