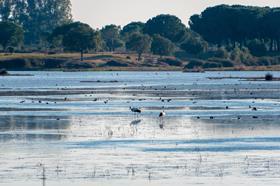 Huelvan berry association Freshuelva has announced that will take part in a demonstration on 4 March to demand improvements to the province’s water infrastructure, which it says are crucial for the survival of the berry sector.

Freshuelva slammed the lack of investment over recent decades, that has resulted in “a province which is rich in water having supply problems, because it has an obsolete infrastructure such as the San Silvestre Tunnel, or there is an area with irrigation problems, such as the Condado de Huelva”.

The protest has been organised by pressure group Y Huelva Cuándo (And Huelva When), made up of different business, economic, neighborhood and educational groups and representatives of various associations throughout the province, who are angry about repeated breaches and delays in the execution of vital improvement works on the province’s water infrastructure.

This includes the completion of the transfer of water from the Tinto-Odiel-Piedras hydrographic demarcation to that of the Guadalquivir and Huelva County, approved in 2018, which would help safeguard the future of the agricultural sector of the province and the Doñana National Park.

According to Freshuelva, the province “cannot wait any longer for the upgrade of the San Silvestre Tunnel, which would guarantee the supply of water not only for agriculture and industry, but also for human consumption”.

The Doñana National Park has become a focal point in the discussion over the province’s water supply following moves by the regional authorities to grant an amnesty to the farmers illegally tapping its aquifer to feed the booming strawberry sector.

The plan is opposed by conservation groups who say it will spell further disaster for the local environment.

Freshuelva noted that the 4 March demonstration would also serve to support calls for the Port of Huelva to be considered as a border of the Schengen area, paving the way for the establishment of trade connections with markets outside the European Union such as Asia, the US and the UK.