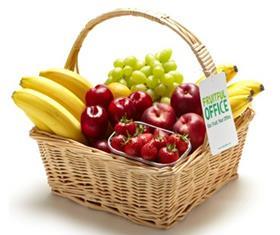 A study by UK workplace fruit provider Fruitful Office has suggested that providing fresh fruit at people’s desks increases productivity by more than 10 per cent, boosts energy levels and encourages employees to adopt a healthier lifestyle.

Fruitful Office teamed up with the Ethical Property Company to conduct a workplace trial in order to measure the impact fresh fruit has on the lives of office workers.

Over three-quarters of the 320 people who took part in the research said the provision of free fruit made them feel more valued and more than 80 per cent thought having fresh fruit available at their desk had improved their quality of life at work, the group revealed.

Almost 80 per cent of those that ate the free fruit said they felt more healthy, with just under half reporting higher energy levels and just over a third claiming the fruit made them feel more alert.

Fruitful Office delivered 216 baskets during the trial, containing seven varieties of fruit, with the 1,584 bananas being the fruit of choice. Baskets were placed on desks, filing cabinets and window ledges to ensure they were always within easy reach.

The building’s residents were asked to complete a pre-trial and post-trial survey to monitor the change in attitude, perception and outlook on both their productivity and their working environment, together with questions about their eating habits.