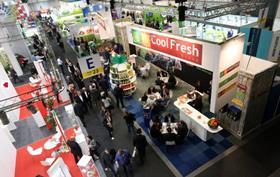 In its 25th anniversary year, Fruit Logistica, the leading industry event for the global fresh produce trade will attract some 3,100 exhibitors from 86 countries to Berlin from 8 to 10 February 2017.

'Fruit Logistica was launched in 1993 in response to an industry demand and has seen impressive development ever since,' said Dr Christian Göke, CEO of Messe Berlin. 'We started the first year with 100 exhibitors. In 2017, for the first time, the number of exhibitors will top the 3,000 mark.

'As a leading global trade fair, Fruit Logistica is a don't-miss event for players across the entire value chain,' he added. 'Not only does the trade fair offer outstanding business opportunities, it has also gained a solid reputation as a platform for information and innovations.'

More than 70,000 buyers and trade visitors from over 130 countries will once again have an opportunity to benefit from the widest variety of international exhibitors ever assembled under one roof.