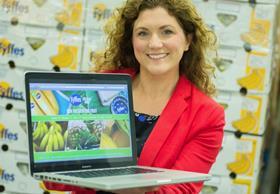 Fresh produce giant Fyffes is currently engaged in what their marketing manager in Ireland, Emma Hunt-Duffy, has described as 'an international brand enhancement programme', the impact of which will be seen across the organisation’s key corporate and brand communications platforms throughout its core European markets.

Amongst those elements subject to modification, the most visual change will be seen in the positioning of the company’s familiar blue, oval-shaped logo, coupled with a new communications initiative entitled ‘Discover More’ – aimed at encouraging more consumer curiosity and engagement.

Another significant change sees the company’s website being redesigned to incorporate a number of new elements, which make up the Fyffes global story.

These changes include the work that Fyffes has been doing to promote the natural qualities of fruit; measures to educate young people and their parents in relation to the growing and harvesting of bananas; and matters relating to corporate social responsibility reflected in the support being given by Fyffes to fund activities aimed at improving the living standards of farmers and their communities.

Overseeing the changes along with colleagues from the UK and European brand teams, Emma Hunt-Duffy said: 'The improvements now being made across our brand communications will portray an even more modern and progressive image for the successful global enterprise of Fyffes.

'In addition, the improvements being introduced will have the parallel goal of building awareness of the Fyffes name and brand in those new market territories and food product categories in which the company is engaged,’ she added.