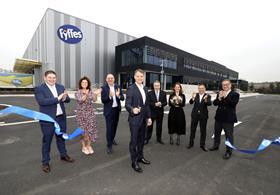 A new banana ripening and distribution centre, owned and operated by banana distributor Fyffes, has opened and commenced operations in Balbriggan, Ireland.

Representing an investment by Fyffes in the order of €25m, the centre will have an output of over 7m bananas per week – approximating to over 60,000 tonnes annually – when working at full capacity.

The bananas at the facility are all for supply to Irish retailers, wholesalers and food providers, north and south.

The new facility was commissioned in November 2019, and comprises an 8,500m2 ripening and distribution centre and an adjacent 1,750m2 two-storey office and administration block, with requisite loading bays, truck and customer parking and ancillary services areas.

Replacing the company’s former facility in Swords, it has the capacity to accommodate a staff of 120 persons at peak.

Serviced directly from Cork Port – through which most of Fyffes' produce arrives directly into Ireland from Central and South America – the new facility has been described as an 'essential link in the Fyffes distribution chain'.

'Its primary function being to ensure that bananas are delivered to consumers at the perfect point of freshness and quality,' Fyffes explained.

The company said that the new plant was likely to be regarded as one of the most sustainable buildings of its kind in Ireland.

With the potential to use some 60 per cent less energy than the building it replaced, some of its energy will be supplied by roof-mounted photovoltaic panels whilst both the office heating and cooling systems will be fed via a Ground Source Heat Pump (GSHP).

Rainwater harvesting systems have been installed to help conserve and reduce water consumption.

The building uses energy efficient LED lights throughout and features window glazing and external ‘brise soleil’ to provide passive shading and reduce overheating, as well as a green roof system has been installed for growing flora and encouraging pollinators.

Speaking to guests and officials at an event held to mark the opening of the new centre, Fyffes CEO Helge Sparsoe said: “The new development will have a very positive impact on Fyffes by delivering even greater productivity and strengthening its ability to service the needs of our customers.”

Describing the new plant as “a commitment to securing Fyffes future operations in Ireland,” Sparsoe pointed to the benefit it will bring to the economy in North County Dublin through employment and the number of jobs it will sustain.