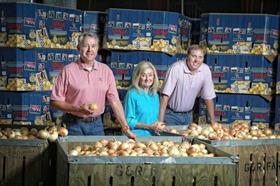 G&R Farms has revealed that it will mark its 75th anniversary with a new consumer marketing campaign promoting the family’s legacy along with its sweet onions from Peru.

The campaign will feature G&R’s history and heritage along with their focus on sustainability with the group's recent Rainforest Alliance certification.

Set to launch during the month of September, the campaign includes a newly design bin, point-of-sale materials, public relations and social media activities, while a downloadable favourite family recipes booklet will be featured on Facebook along with weekly giveaways.

Historical family photos and video footage will be displayed across all social media channels educating consumers about the company’s history and heritage.

G&R Farms began as a small family farm in 1945 owned by Walter L Dasher, and the organisation has evolved across four generations and expanded to include over 5,000 acres that encompass several commodities with a primary focus on sweet onions.

“We’ve been growing, packing, marketing and shipping sweet onions for nearly seven decades,” said Walt Dasher, vice-president of G&R Farms. “My grandfather was one of the original pioneers that helped with the development and growth of Vidalia onions. We’re continuing this tradition as we focus on perfecting the quality and flavour of our year-round onions while doing our part to protect the environment.”

G&R Farms will begin importing sweet onions from Peru in July this year due to a shortened Vidalia season.

The company started shipping a small supply of onions from Peru in 2009 and in just ten years, it’s grown to over 44m pounds in 2019.

“We’ve continued to incorporate our strict quality-control standards into our Peruvian sweet onion programme which has resulted in such high-demand and consistent, premium quality,' Dasher noted. 'But we’re most proud to display the Rainforest Alliance logo on our bin, POS and packaging which lets shoppers know our family farm is dedicated to sustainability and ensuring the health and well-being of our farmworkers in Peru.

“Although, much has changed over the years, the cornerstone of our business which is rooted in honesty and integrity has remained the same,' he added. 'We’re proud of this legacy as we look forward to an even brighter future.”