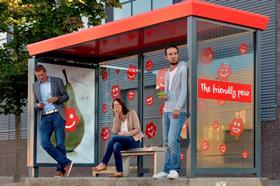 Consumers have apparently been waiting for a more convenient, longer-lasting pear to arrive

Northern European topfruit marketer GKE is to begin selling a new licensed pear called Migo, which it says will be positioned as an ideal snack that can be eaten any time of day, in any location.

Presenting the branded variety at a special launch event, the company said the so-called ‘friendly pear’ would not only offer sweetness, freshness and juiciness, but would also distinguish itself from competing varieties by virtue of its good storage potential and shelf-life, its smooth peel, beautiful shape and size, and good firmness.

Migo is being grown exclusively by partner producers under licence from GKE, a subsidiary of European Fruit Cooperation (EFC) which is also responsible for licensing and marketing the club apples Kanzi and Greenstar. the first volumes are due to be sold from the start of this European season.

Established more than a decade ago as a joint venture by Veiling Haspengouw in Belgium, Fruitmasters Group in the Netherlands and Württembergische Obstgenossenschaft (WOG) Raiffeisen in Germany, EFC represents around approximately 1,500 fruit growers generating a yearly turnover of more than €250m.

“Following the launch of the Kanzi concept apple over ten years ago, we felt it was time for a new pear,” commented Urs Luder of GKE. “So we once again joined forces to develop a new concept pear to be launched on the market.”

The new pear has apparently been selected in response to increased consumer demand for more convenient, longer-lasting varieties.

“We asked real pear lovers to share their wishes and even listened to pear haters’ comments,” Luder added. “Why do they dislike pears? Their reaction was loud and clear: ‘We would gladly eat pears, but they should be less messy and of good quality, have a longer shelf-life and, last but not least, they need to be juicy! We’re looking for pears we can eat as a snack on the go.’

The first Migo pear trees were planted in 2014 and reportedly offer stable yields and require little pruning. Moreover, their fruit is said to be generally a little larger than Conference pears.

This season’s inaugural harvest will, however, be relatively small. “We are striving for a controlled expansion of the agricultural land to meet the market demand for Migo,” Luder explained. “We are confident that this new pear and the Migo concept will offer added value to growers, retailers and consumers alike.”