GM banana could boost vitamin A 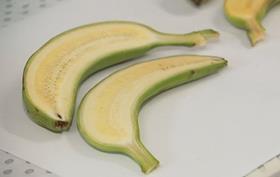 Scientists working in Uganda have reportedly harvested their first crop of a genetically modified banana that they say could provide consumers with significantly higher levels of vitamin A and iron.

As reported in The Times, a team of researchers from Australia has spent ten years investigating the potential to grow firstly modified Cavendish in Queensland and subsequently modified African cooking bananas in Uganda.

The changes made to the banana’s genetic makeup are viewed as a means to combat vitamin A deficiency, which is apparently becoming more and more prevalent among African children and which can lead to blindness, problems with the immune system, and poor brain development.

“We are getting over four times our target level [of vitamin A] so we are very happy about that,” commented James Dale of Queensland University of Technology, who heads up the research team.

In an interview with Australian broadcaster ABC he added: 'Over five generations we've been able to maintain the level of pro-vitamin A and, in some instances, increase it over time which is really exciting.”

However, the fruit is not expected to be available to the general public in Uganda for another six years, because the product must undergo regulatory testing.