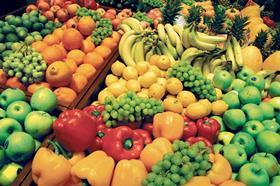 Freshfel Europe’s and Aprifel’s EU-wide campaign ‘Follow me to be Healthy with Europe’ was presented at the recent Politico EU Studies and Career Fair, which took place in Brussels, Belgium on 15 February.

At the event, students and young professionals were introduced to the campaign and challenged to take part in its #400gChallenge.

Now in its second year, ‘Follow me to be Healthy with Europe’ aims to improve millennials’ eating habits by inspiring them to eat at least 400g of fruit and vegetables per day.

During the fair, over 300 students and young professionals visited the campaign stand to learn about the ‘Follow me to be Healthy with Europe’ campaign and how to improve their daily dietary habits with the campaign’s #400gChallenge.

The campaign stand featured a popular smoothie bike where fair visitors were invited to cycle and blend their own smoothie with fresh fruit and vegetables.

The aim of the activity was to demonstrate how fruit and vegetables easily fit into an active and healthy lifestyle of a young adult and that achieving the consumption of at least 400g of fruit and vegetables per day is simple and can be as uncomplicated as having a morning smoothie.

To facilitate their immediate participation in the #400gChallenge after their visit to the stand, visitors were also encouraged to take a piece of fruit as a nutritious and tasty snack to consume later in the day during their visit to the fair.

Visitors to the stand additionally received carrot seeds to plant and grow at home so that they could continue the #400gChallenge into the coming months.

The World Health Organization (WHO) estimates that by 2030 more than 50 per cent of the European population will suffer from obesity, and to combat this WHO recommends individuals consume a minimum of 400g of fruit and vegetables per day.

Currently EU citizens are falling well below this consumption rate with only 14 per cent meeting the daily recommendation.

The #400gChallenge headed up by Freshfel and Aprifel as part of the ‘Follow me to be Healthy with Europe’ campaign is described as a proactive response to the growing challenge of the general health of Europeans today and in the future.

Launched in July 2019 and running until the end of 2021, the part EU-funded digital campaign ‘Follow me to be Healthy with Europe’ aims to increase overall awareness of the role that a healthy diet can play towards maintaining a healthy lifestyle to ultimately improve millennials’ dietary habits.