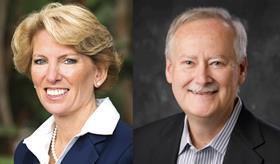 Produce Marketing Association (PMA) and United Fresh leadershave provided a series of updates on their newly formed organisation, which has been named the International Fresh Produce Association.

PMA and United Fresh, the two national produce associations in the US, announced plans to join forces in March this year, and the International Fresh Produce Association is set to launch on 1 January 2022.

Co-CEOs of the new association, Cathy Burns and Tom Stenzel, were joined byexecutive committee members in a Zoom announcement on 28 October to share details of the organisation, including the board of directors.

Selecting and recruiting the board of directors was one of the first responsibilities of the newly announced executive committee.

“I’m excited to have the opportunity to lead and collaborate with this board of directors,” said Bruce Taylor, chair of the new organisation and CEO of Taylor Farms.

“This group, in partnership with staff, will help set the strategic tone and direction as we deliver against the seven strategic priorities shared when the new organisation was announced in March. I can’t wait to get started.”

Building on a combined history of strong volunteer leadership, the board of directors will work in partnership with an experienced team at the new association to provide guidance and expertise for industry members across the fresh produce and floral supply chains.

“In assembling this board of directors, we sought to strike a balance of those individuals who had strong prior experience from serving on United and PMA volunteer groups as well as emerging leaders who will bring new perspectives and insights to drive the new organisation forward and create solutions to address industry challenges,” said Danny Dumas, UFPA chair and president, of Courchesne LaroseUSA.

“Because the new organisation will reflect global fresh produce and floral communities, the new board is organised to represent the many businesses we’ll serve in coming years as we work together to help our members prosper,”said Dwight Ferguson, PMA chair and president and CEO of the California Agricultural Leadership Foundation.

The new association board of directors includes: