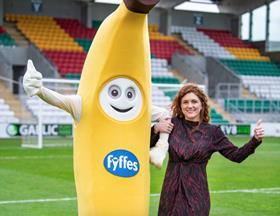 Freddy Fyffes bananas remain the top choice of parents when it comes to picking a baby and toddler snack food, according to the results of the National Parenting Product Awards competition.

Based in large part on a survey conducted by Millward Brown amongst parents and experts in Dublin, Cork and Limerick, Irish banana importer Fyffes popular pre-packed bananas emerged as the Gold Award winner in the Food and Feeding section of the competition for the fifth time in the competition’s six year history.

Accepting the award at a prize-giving ceremony held at the Westbury Hotel, Dublin recently, Fyffes marketing manager Emma Hunt-Duffy said: “As parents are becoming increasingly conscious of the food their children are eating, we are delighted that Freddy Fyffes bananas continue to be recognised as a natural and nourishing snack food”.