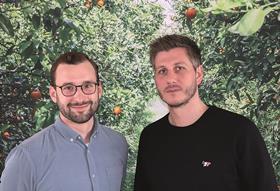 German fresh produce trader Kölla has appointed Florian Walther and Benedikt Wetterau to its management board.

In a statement, the company said Walther would take over the operational part of its business from Georg Hoffmann, while Wetterau succeeds Christoph Mis in the Finance and Controlling department.

Hoffmann and Mis, meanwhile, will remain with the organisation, focusing on “more extensive” management tasks at parent group Kölla Holding.

Florian Walther is no stranger to the sector. 'You could say I grew up in this industry, as a child, I got to know all about fruit and vegetables in the family business, the wholesaler Dietmar Walther in Hanover’s wholesale market.”

He initially trained on Munich’s wholesale market as a trader of domestic and imported produce, then moved after graduating in 2010 to an old established fruit trading company, also based in Munich.

After seven successful years, he moved again, to join Kölla in Kaarst, in Nordrhein-Westfalen. 'I wanted to take the next step,' he explains, 'to help shape something new in a renowned and international company.'

'We are in a comfortable position to use Kölla's good reputation and flexibility to be well positioned and successful in the future,” he comments.

“We will expand existing synergies even more than in the past, and make use of the experience and knowledge of the entire Kölla Group.'

At his side, as well as long-standing managing directors Peter Hoffmann and Emilio Maura Martin, will be Benedikt Wetterau.

A trained banker and graduate in business, Wetterau swapped financial markets for fresh produce to join Kölla’s commercial department at the beginning of 2019.

The following year, he joined the management of Kölla Nova as commercial manager.

'Even during our first year together at Nova, we realised that our thinking was aligned,” he says of his colleague. “I am sure that we are well positioned to successfully master the challenges of the coming years.'