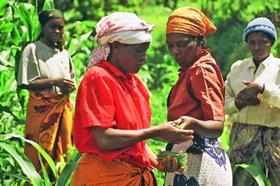 Nearly nine out of ten Kenyan farmers have seen their financial situation deteriorate over the course of the coronavirus pandemic, according to research from 60 Decibels, as lockdowns and airport closures have contributed to falling demand, dropping prices and rising costs of raw materials and supplies.

The data was based on a telephone survey conducted in June and July 2020 looking at a stratified random sample of 1,000 Kenyan crop and livestock farmers living in agrarian areas in 45 of Kenya's 47 countries, excluding Nairobi and Mombasa.

'The situation has rapidly deteriorated for many Kenyan farmers,' said Venu Aggarwal, agriculture director at 60 Decibels. 'Since agriculture dominates the Kenyan economy and employs approximately 75 per cent of Kenya's workforce, the ability of farmers to weather the pandemic storm is vital to Kenya's future economic outlook.'

According to 60 Decibels' research, approximately 90 per cent of farmers have cut the number of people working on their farms, while 17 per cent reported a decrease in at least one income source compared with the same period last year.

Nearly six out of ten farmers have made unplanned withdrawals from their savings, the research revealed, over 40 per cent have borrowed money to cover shortfalls in income, 18 per cent have reduced payments on loans, and 15 per cent have had to sell off assets.

As many as one-third of Kenya's farming households are in economic distress, according to 60 Decibels' Vulnerability Index.
'When we see a large number of households entering economic distress, we worry about the consequences for those individuals, but also the broader economic consequences for Kenya,' said Nilah Mitchell, head of East Africa at 60 Decibels. 'It is certainly a call to action within the public and private sectors.'