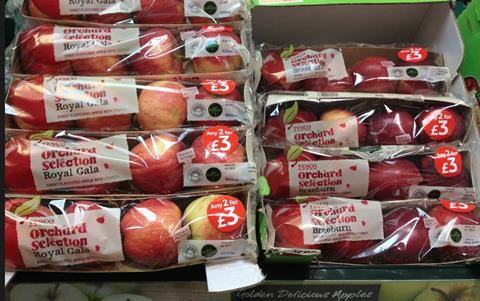 Gala and Braeburn remain among Europe's most commonly produced varieties

The World Apple and Pear Association (Wapa) has published its Northern Hemisphere crop estimate to more than 220 representatives at the 37th annual Prognosfruit conference in Prague, predicting a later start to the season but no major overhang of Southern Hemisphere fruit.

As reported earlier, apple production in the EU is expected to increase by 7 per cent compared with the 2012 crop to 10.798m tonnes, while European pear growers are predicting an 18 per cent increase year on year to 2.236m tonnes.

Around 6 per cent above the average for the last three years, the predicted increase in this season's European apple crop includes an 11 per cent upturn in Golden Delicious production to 2.545m tonnes, a 7 per cent rise in Gala output to 1.189m tonnes, 8 per cent more Idared at 1.06m tonnes and a 5 per cent expansion of the Red Delicious crop at 569,000 tonnes.

Wapa also reported that apple production in other key Northern Hemisphere countries was expected to grow: the US is forecasting an increase of 15 per cent, Turkey's crop will be up 10 per cent and Ukraine's 5 per cent larger.

Production is set to decrease in China (down 8 per cent), however, and likewise in Russia (down 14 per cent).

The European pear crop, meanwhile, will be bigger than in 2012 but approximately 2 per cent lower than the average figure for the past three years.

Elsewhere in the Northern Hemisphere, the US expects a slight increase in its pear output (4 per cent), as do Turkey (4 per cent) and Ukraine (2 per cent).

The estimates for China and Russia mirror the trend for apples, down 5 per cent and 14 per cent respectively.

'Initial indications are that, due to a late flowering and cool spring, harvest will start later than normal in much of Europe,' Wapa said in a statement. 'Most are expecting the harvest to be delayed by one to two weeks while others are as much as a month later than normal.'

An update of the Prognosfruit forecast will be made at the beginning of September, a move designed to account for new developments that are more likely this year due to the late start.

'Despite the increased volume of apples, total supply to the fresh market is expected to remain similar to last year with more volume expected for processing,' the statement continued.

Conditions for apples on the European market are expected to be good at the start of the season, as the remaining Southern Hemisphere stocks are relatively small and should clear quickly.

'There is expected to be no overhang of Southern Hemisphere fruit by the time harvest is in full swing,' Wapa confirmed.