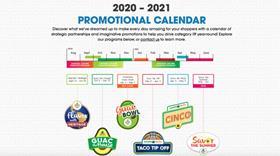 Avocados are one of Mexico’s biggest success stories. Last year, the country exported more than 1.3m tonnes of the fruit to markets worldwide.

While the bulk of this ends up in the US, the sector has successfully positioned itself in other key strategic markets such as Canada, China, Japan and, to a lesser extent, Europe, South America and even the Middle East.

This is largely due to the marketing efforts of the Association of Producers and Exporters of Avocados of Mexico (APEAM), through its brand Avocados From Mexico (AFM).

APEAM has developed highly effective marketing strategies tailored to each country. In the US, the strategy is focused on making a significant investment in promoting avocado at different times of the year, beyond the Super Bowl and Cinco de Mayo when the product is already very well positioned among North American consumers.

In Canada, which last year imported 37,378 tonnes of Mexican avocados, promotions are centre on television spots in hockey league games, the country’s favourite sport. Retail promotions and a continued presence on the most watched television channels are also integral to marketing efforts.

In China, meanwhile, APEAM has a strategic alliance with ecommerce giant Alibaba. In addition, it has a strong presence on Weibo and WeChat, the social networks with the highest penetration in the country.

To promote the fruit in Japan, APEAM a recruited actor Moccomichi, one of the most prominent actors in the Japanese television and film industry, to serve as an ambassador for the avocado industry.

It has also created a mascot called Avogo, which it uses for in-store promotions as well as on national television and in trains.

In addition to all these efforts, APEAM maintains a strong presence in the main global industry fairs such as Fruit Logistica, PMA Fresh Summit, Foodex Japan and United Fresh, among others.

Looking ahead to the coming years APEAM says the big challenge facing the sector is to recoup some of the lost value of shipments due to disruption of the foodservice channel in the US and the economic crisis generated by the pandemic.

While the closure of restaurants and public institutions such as schools hit sales to this channel in 2020, the sector saw a surge in retail demand thanks to increased home consumption as people sought out healthier diet choices.

This helped to position avocados as a daily product rather than an occasional purchase.

After a six-year run, AFM has decided not to take its usual TV advertising spot during the Super Bowl, choosing instead to strengthen promotions before, during and after the event.

“The campaign will feature aggressive promotions with restaurant chains for January, February and March,” APEAM said.

“We hope that with the arrival of the vaccine, the foodservice channel will return to what would be a ‘new normal’ and will have to adapt in order to see a recovery in this channel. At the same time, a strong promotional action is planned for the summer, which has never been done before.”

Elsewhere, the strategy in China will continue to reinforce awareness of the benefits of Mexican avocados in terms of flavour, versatility and health.

This strategy has produced significant results in the past and could continue to allow double-digit growth in the medium and long term, APEAM believes.

In Japan, meanwhile, the marketing campaign will focus on beauty and health for the body. Finally, in Canada promotions will feature in-store activities, ecommerce and alliances with other associations and brands.

“With a solution to the pandemic on the horizon, the future couldn't be more promising for Mexican avocados,” APEAM said.

“Once the restaurant and public food service industry reopens, they will find a public more than willing to find avocados on their menus as they have become used to consuming them at home.

“While there will be more competition from different origins, the brand image, quality and year-round availability of Avocados from Mexico will make them continue to be the origin of choice for consumers, chefs and health enthusiasts around of the world.”