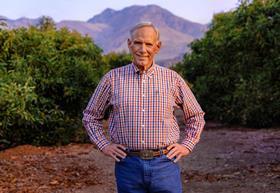 Mission Produce has announced that its founder, president, and CEO Steve Barnard has been named an Ernst & Young Entrepreneur Of The Year 2021 Greater Los Angeles Award finalist.

Now in its 35th year, the Entrepreneur Of The Year programme honours 'unstoppable business leaders whose ambition, ingenuity and courage in the face of adversity help catapult us from the now to next and beyond'.

Barnard was selected by a panel of independent judges. Award winners will be announced during a special virtual celebration on 29 July and will become lifetime members of Entrepreneur Of The Year alumni from around the world.

“I’m proud to represent Mission Produce among some of the most influential businesspeople in the country,” said Barnard. “Over the last four decades, Mission has left an incredible mark on the industry, leading the way and setting the standard in the avocado business. It’s a great honour to have the opportunity to highlight the work we’ve done in such a prestigious programme.”

Regional award winners are eligible for consideration for the Entrepreneur Of The Year National Awards, to be announced in November at the Strategic Growth Forum.