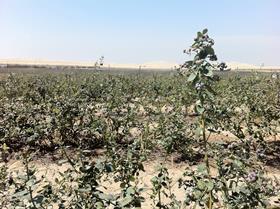 Higher production and access to new markets like China and Brazil has led to a surge in Peruvian blueberry exports in the first nine months of 2017.

Figures from agri-export association Adex show that between January and September shipments reached US$123m, a 30.7 per cent increase on the same period last year.

Paula Carrión Tello said that following the signing of the phytosanitary protocol at the end of 2016 China has become Peru’s third biggest market for blueberries.

“Although small quantities were sent to China in January and February it wasn’t until July when regular shipments got underway,” she noted.

Exports to Brazil, meanwhile, reached US$174,581, after the market opened in April of last year.

Peruvian blueberries are now exported to 28 countries worldwide. Although sendings to the US fell by 19.5 per cent, it remained the biggest market, accounting for 38 per cent of the total, worth US$46.6m.

It was followed by the Netherlands (US$28.6), China, the UK, Hong Kong and Canada.

With Peru’s blueberry production set to top 120,000 tonnes by 2021, the country is scrambling to secure access to new markets, among them Chile, South Korea, Japan, India and Taiwan.